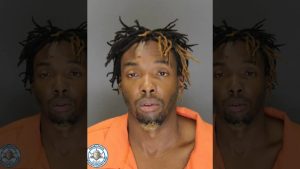 The Aurora Police Department announced the arrest of 30-year-old Steve Sinclair this week and stated he would be charged with a hate crime and attempted murder after allegedly yelling, “Black Lives Matter!” while stabbing a white man who was trying to run away from him.

Things are really getting nutty out in the streets, y’all. Be careful.

“An arrest affidavit says Sinclair used a knife to stab 29-year-old Michael Conner who was transported to the hospital for his injuries and a collapsed lung,” 9News reported. “Conner, a white male, told police while at the hospital that Sinclair, a Black male, shouted ‘Black lives matter!’ prior to stabbing him.”

The local NBC affiliate reported that it was not exactly clear what happened in the moments leading up to the attack but that people who witnessed the attack said that Sinclair approached Connor and said, “I’m going to kill you and your dog.”

“One witness said Conner tried to run away and defended himself with a stick,” the station added. “Sinclair continued saying, ‘Black lives matter’ to police when they arrived according to the first officer on scene. That officer wrote that Sinclair had his hands up and said ‘I stabbed him, I’m a psychopath,’ refused to sit down and ‘insisted’ that officers should shoot him. He was arrested without incident according to the report.”

Sounds like this guy is a few bricks short of a full load, right?

CBS Denver noted that several witnesses saw Sinclair pursuing Connor while Connor attempted to get away from him.

The victim’s injuries are pretty serious, causing him to be out of work for the next six weeks.