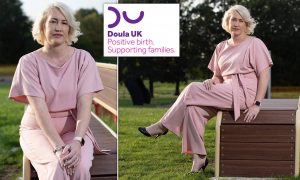 Apparently the most controversial thing to say in 2019 is that only women can give birth to children.

Because it’s fun to trigger folks sometimes, I’m gonna say it again: only women can give birth to children. I might even buy some billboard time just to get the message, one which we’ve apparently forgotten, out there. Might add it to my Twitter name. Might hire a sky-writer to get the message out, since apparently Western society has forgotten that only women can give birth to children.

According to The Daily Mail, a long-time doula and spokeswoman for the UK’s organization of non-clinical birth support coaches was pressured to quit her job after daring to post on Facebook that—you guessed it—only women can give birth to children.

“Lynsey McCarthy-Calvert, 45, was forced to stand down as spokesperson for Doula UK and has since resigned altogether from the national organisation for birth coaches,” says the Mail. “Her exit comes after transgender rights activists triggered an investigation in which Doula UK concluded her message breached its equality and diversity guidelines.”

Careful to note that Doula UK did not fire McCarthy-Calvert, the Mail specifies that she was pushed to resign, now “believing Doula UK had ‘acquiesced’ to demands from a small number of activists and failed to stand up for women’s rights.”

In her now-deleted Facebook post, McCarthy-Calvert pointed out the problem with a new prevention campaign from Cancer Research UK which stated that Pap smears are “relevant for everyone aged 25-64 with a cervix,” rather than, you know, just saying women aged 25-64.

“In response,” the Mail continues, “Mrs McCarthy-Calvert posted a photograph on Facebook of a negligee-clad woman somersaulting underwater, with the wording: ‘I am not a ‘cervix owner’ I am not a ‘menstruator I am not a ‘feeling.’ I am not defined by wearing a dress and lipstick. I am a woman: an adult human female.’”

A-freaking-men. No shortage of people have pointed out this irony, but allow me to beat the dead horse and ask how a man can declare himself to be a woman by wearing women’s clothes and makeup and even mutilating his body if gender is a social construct and clothes, makeup, and even anatomy don’t define gender in the first place?!

“Women birth all the people, make up half the population, but less than a third of the seats in the House of Commons are occupied by us,” McCarthy-Calvert added, concluding that women who acknowledge biological differences between women and men are often “subjected to cries of bigotry and transphobia when they say they don’t want to have sex with a woman with a penis.”

They alleged that the post contained several ‘trans exclusionary comments’ including the description of a woman as an ‘adult human female’.

Doula UK immediately withdrew Mrs McCarthy-Calvert as spokesperson and, after a four-month investigation, its board of directors concluded in March the post ‘does breach Doula UK’s guidelines’.

Last night, Doula UK denied it had ‘acquiesced’ to activists or that Mrs McCarthy-Calvert had been ‘in some way driven out of the organisation’.

A spokesperson added: ‘We are proud to say that we seek to listen to the lived experience of marginalised groups and make changes – including changes to the language we use – if we believe it is necessary to make the Doula UK community more welcoming and supportive.’

“I am angry and sad,” McCarthy-Calvert said after her resignation. “I was effectively ostracised for saying I am a woman and so are my clients.”

“I have been very disappointed by Doula UK’s response. The leadership are paralysed by not wanting to upset transgender rights activists. They have fallen over themselves to acquiesce to their demands.”

Rhetoric from so-called “trans-exclusionary radical feminists” (TERFs) like McCarthy-Calvert demonstrates the expanding divide between traditional leftists and the far-left which has catapulted itself out into the far reaches of sanity and intelligible thought. TERFs might not be friends to liberty and most conservative values, but holy buckets at least they’ve got basic human biology down.