Bill Maher Tells CNN Trump Is ‘Winning.’ But That’s Only The Beginning. 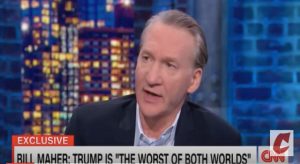 Liberal talk show host Bill Maher recently made an appearance on CNN’s Christ Cuomo’s show Monday night where he plainly stated that President Trump is “winning,” a statement which left every single liberal viewing the program in utter shock.

But, as it turns out, that was just the beginning.

“A lot of times, he’s just owning the libs,” Maher said. “That’s what Republicans do in this era. More than any policy, they want to make liberals cry.”

Maher explained that he doesn’t think Democrats have caught onto Trump’s methods, and said that Republicans, as a result, are able to do what they want in the government.

“[Democrats] never seem to catch on to this bait-and-switch about, you vote for this guy who is going to be the little man’s champion and he gives all the money to the rich people,” he joked. “You have this idea that your path to the American Dream is blocked by immigrants and single mothers on food stamps.”

Maher went on to blast liberals for trying to force political correctness down people’s throats, a sentiment we can all probably find common ground with the pundit.

Maher said that political correctness is a “cancer on progressivism,” noting Democrats “don’t help themselves a lot.”

It’s truly a crazy time in history when Bill Maher says somethign agreeable. Without a doubt, political correctness is a cancer on our society. It prevents the free exchange of ideas, which causes a stagnation in actual, genuine progress.

And yes, President Trump is doing a whole lot of winning, and honestly, Democrats can’t or won’t do anything to stop that from happening. They refuse to see reality.

They’ve become far too radical in their leftism and it’s just simply too much for average, centrist Americans. Dial it back down a few notches. Which is something they probably won’t do, and thus, they will continue to lose the battle come election time and in the culture.