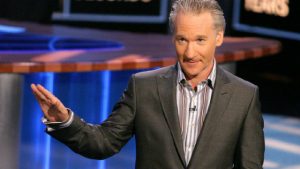 Bill Maher can be really obnoxious and horribly wrong about many things, but he has, throughout his whole career, been a free speech purist and an outspoken critic of political correctness.

He also just so happens to be one of the very few leftists who will give even the most controversial conservatives, from Ann Coulter to Milo Yiannopolous, a platform, which is admirable.

He even went as far as to defend Alex Jones, the out-there conspiracy theorist and founder of InfoWars who just fell victim to an Orwellian-style coordinated de-platforming of his brand, something that should send chills down the spine of any First Amendment-supporting American.

Maher’s audience, on the other hand, was thrilled at the news.

On Friday night Bill Maher defended Alex Jones and his right as an American to freedom of speech.

His audience and panelists thought differently.
They cheered like babboons at the news that Alex Jones was eliminated by the far left tech giants.

Maher’s defense of Jones is worth repeating, even if his audience disagreed:

Bill Maher: “If you’re a liberal, you’re supposed to be for free speech. That’s free speech for the speech you hate. That’s what free speech means. We’re losing the thread of the concepts that are important to this country. If you care about the real American sh*t or you don’t. And if you do, it goes for every side. I don’t like Alex Jones, but Alex Jones gets to speak. Everybody gets to speak.”

Those on the left are quickly abandoning their liberal ideals for an authoritarian stance, and no longer believe in free speech. They believe in curated speech, which should absolutely scare you.

If Bill Maher’s own audience can’t agree on this, we definitely need to take this as a serious warning.