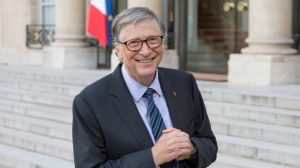 Bill Gates, billionaire and founder of Microsoft, seemed to be rather uncomfortable when he was asked about his past relationship with pedophile sex trafficker Jeffrey Epstein, who died while in prison back in 2019.

There are a lot of rich and powerful people out there with connections to Epstein who are still sweating bullets wondering when questions are coming their direction or when police might come knocking on the door with an arrest warrant. It’s awesome to see them so worried and concerned.

After PBS’s Judy Woodruff asked him two questions about his past relationship with Epstein, Gates, who called the meetings a “mistake,” appeared uncertain to respond to a question about whether there’s a lesson from his dealings with the late millionaire.

“Well, he’s dead, so …” Gates went on to say during his conversation with the PBS NewsHour anchor on Tuesday. He then tried to change the direction of the interview toward his philanthropic healthcare work, “You know, in general, you always have to be careful and, you know, and I’m very proud of what we’ve done in philanthropy, very proud of the work of the foundation. That’s why I get up every day and focus on.”

WATCH: @JudyWoodruff asks Bill Gates about his meetings with Jeffrey Epstein a decade ago, after Epstein had already been convicted of sex crimes.

"Those meetings were a mistake," Gates says. "They didn't result in what he purported and I cut them off." pic.twitter.com/7gg9osnzpu

Gates admitted in August to having several dinners with Epstein, but he reiterated that he cut off the relationship when it became clear Epstein wouldn’t be helpful to his philanthropy efforts.

“Those meetings were a mistake. They didn’t result in what he purported, and I cut them off. You know, that goes back a long time ago now, so there’s nothing new on that,” the billionaire stated.

Gates’s acknowledgment of a relationship with Epstein came shortly after his divorce from Melinda Gates was finalized. Microsoft board members wanted to remove Bill Gates from his position in 2020 after an investigation revealed that he had an affair with a Microsoft engineer 20 years prior. Gates resigned before they could take action.

Epstein was arrested back in July of 2019. He was then charged with sex trafficking and conspiracy for allegedly abusing the girls, some of whom were only 14-years-old. He pleaded not guilty just before he was found dead in his cell in August.

The man’s death was ruled a suicide, but there are a lot of suspicions that due to his connections with very powerful people, someone might have had him killed. As of now, those are just rumors.