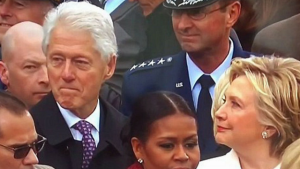 I can’t figure out if I want Bill Clinton to shut up forever or to keep talking and digging himself, and all his valiant defenders, deeper into this #MeToo black hole.

So, Clinton wrote a book with James Patterson for some reason, and he’s been doing his first press appearances since his wife’s incredibly ill-fated 2016 Presidential campaign.

Since the inception of the #MeToo movement, no one on the left, including Bill Clinton himself, seems to know what to do about the fact that he is one of the most notorious womanizers and accused sexual predators of our generation.

Yet, he keeps doing press for his silly little book, and he keeps getting questions thrown at him about sexual abuse scandals. Of course, these reporters are so soft on the former POTUS that he has yet to be asked point-blank about the violent rape he has been accused of, but that hasn’t protected him from some incredibly awkward, defensive, and downright outrageous comments.

He first got, in his words, “hot under the collar” when asked if he owed Monica Lewinsky an apology during an appearance on NBC. The following evening, fortunately, Steven Colbert, ever the hard-hitting reporter, literally offered him the chance at a “do-over” so Clinton could explain that he thought the #MeToo movement was “long overdue” which his accusers most likely agree with.

Now, however, he has once again made some pretty outrageously offensive comments in an attempt to defend disgraced former Senator and comedian Al Franken, one of the first of casualties of the #MeToo movement’s witch hunt division.

During [a] PBS Newshour interview, Judy Woodruff noted that Democratic Senator Al Franken had been driven from office after a groping scandal.

“I think it’s a good thing that we should all have higher standards,” Clinton said. “I think the norms have really changed in terms of, what you can do to somebody against their will, how much you can crowd their space, make them miserable at work.”

Really, Mr. President? The norms have changed in terms of what you can do to somebody against their will?

So I suppose when you allegedly violently raped Juanita Broadrrick, since it was the 70’s, there were just different norms back then? Or when you seduced a 21-year-old intern as you held the most powerful office in the world, that was totally cool because it was the 90’s?

This actually exposes one of the great fallacies of progressivism: right and wrong don’t change with time. They’re always right and wrong. From 2018 BC to 2018 AD.

Even if you’re a Democrat.