Bill Clinton Refuses to Apologize for Lewinsky Scandal, Says He ‘Did the Right Thing’ 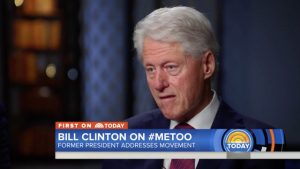 Former President Bill Clinton recently spoke with NBC’s “Today” show, stating that he thinks he was “dealt a bad hand” during the whole Monica Lewinsky Oval Office sex scandal, going so far as to say his actions — which not only included adultery, but also perjury — “pale in comparison” to those of of our current Commander-in-Chief, Donald Trump.

Yes, that’s right, folks. Not only is Bill here not ashamed of himself for what he did, he’s actually attempting to justify it. Just when you thought the Clintons couldn’t possibly get any slimier, along comes Billy boy to totally prove you wrong.

When asked about the scandal, which involved the President of the United States (Clinton) having sexual relations with an intern in the Oval Office, Clinton contended that the media had “omitted” key facts “to make the story work,” and that he “did the right thing” in “defending the Constitution.”

“A lot of the facts have been conveniently omitted to make the story work, I think partly because they’re frustrated that they got all these serious allegations against the current occupant of the Oval Office and his voters don’t seem to care,” Clinton said. “I think I did the right thing. I defended the Constitution.”

President Trump has denied the allegations against him. Former President Clinton’s behavior is well-established, not allegation. And recently, Monica Lewinsky herself implied that, in light of the #MeToo wave of sexual harassment allegations, she believes Clinton’s Oval Office behavior didn’t get the attention it deserved.

Clinton was then asked by NBC reporter Craig Melvin if he felt he owed Lewinsky an apology. You can guess his answer there:

“No, I do not — I have never talked to her. But I did say publicly on more than one occasion that I was sorry. That’s very different. The apology was public,” Clinton said.

Is this guy a piece of work or what?

Clinton is the same man who has been accused, multiple times by several different women, of sexual assault, rape, and harassment. His actions in the Oval Office and before the country destroyed a young woman’s life and brought shame to the office of president, yet he’s not at all sorry?

This sums up everything you need to know about the Clintons in a nutshell. Truly deplorable people.