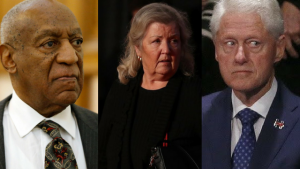 Juanita Broaddrick, the woman who has alleged savage rape at the hands of the notorious womanizer Bill Clinton for decades, had a simple and stunning message for Clinton following the long-awaited Bill Cosby conviction on Thursday.

Cosby was found guilty of drugging and sexually assaulting a Temple University basketball player in his home in Philadelphia in 2004, a verdict that the #MeToo and #TimesUp movements have applauded as a victory for sexual assault survivors everywhere.

However, there is, of course, a massive double-standards on the left, as two of their most iconic figures, Bill and Hillary Clinton, have been covering up for Bill’s sexual assault for their entire political careers.

When Dinesh D’Souza tweeted out the suggestion that perhaps it was time to hold for “the other Bill” accountable, Broaddrick clearly agreed, posting a picture of D’Souza’s tweet on her Facebook page.

Isn’t it time to hold the other Bill accountable? pic.twitter.com/M3YHTTCfSt

Broaddrick, who shared her account of Clinton’s brutal attack in her hotel room in Little Rock in 1978 in an interview with Dateline NBC in 1999, has every right to make this suggestion, as Clinton has never stood trial for this heinous crime.

Broadderick took part in an epic troll by then-candidate Trump during the 2016 elections by sitting in on a joint press conference with Trump on the Clinton sexual assault claims and Hillary’s role in covering them up, as well as attending his second debate with Bill’s wife, Hillary as a guest along with the other accusers.

Tears of joy. Vindication after 38 years of pain & suffering. Thanks to Mr Trump & all of you. It does go away.

It must have felt good to see a woman who threatened her and has been covering up for her husband’s crimes for four decades see her lifelong dream crumble before her eyes in such a humiliating way for sure!

But we’re willing to guess she’d be infinitely happier to see her attacker stand trial for the accusations he’s been successfully burying for most of his adult life! Let’s hope one day soon Mrs. Broaddrick can feel as vindicated as Cosby’s victims did yesterday!