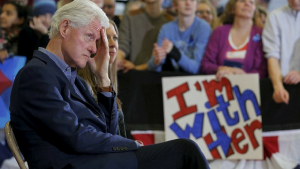 After decades of excuses and denial, the left seems to finally be ready to throw the Clintons under the bus.

And why wouldn’t they? Not only are they no longer politically valuable to the Democrats, their decades of corruption and covering up rape has, despite all the adamant denial, been a black eye on the Democratic party since the infamous couple left the White House.

Hillary’s defeat was a wake-up call for many, and as long as she keeps wandering around the country, rambling about all her fantastical reasons for having lost the election, it will continue to hurt Democrats.

At the inception of the #MeToo movement last year, when major Hillary donor and “god” of leftist Hollywood (is there any other Hollywood?), Harvey Weinstein, was exposed for the things everyone knew he’d been doing for years, many on the left were forced to denounce Clinton as well.

You see, it wasn’t important to examine his rape allegations a quarter century ago, but it’s very important now that Democrats can virtue signal by turning on one of their own.

The 42nd POTUS has been in the news again this week after an interview with NBC in which he self-pityingly denied he had any reason to apologize to Monica Lewinsky, the White House intern he famously had an extra-marital affair with when she was 21 and he was 49.

One of the serious issues with the #MeToo movement is that many have included everything from a dirty joke to violent sexual assault under the same umbrella term. So while you might take issue with this, the fact remains that many on the left ought to consider the fact that when Clinton was literally the most powerful man in the world, it was morally questionable for him to have an affair with the doe-eyed Lewinsky, even if it was consensual.

“Now, at 44, I’m beginning (just beginning) to consider the implications of power differentials that were so vast between a president and a White House intern,” Lewinsky wrote in Vanity Fair. “I’m beginning to entertain the notion that in such a circumstance the idea of consent might well be rendered moot.”

Clinton, who just authored a book with thriller writer James Patterson (…why), tried to walk comments made on the NBC interview back during an appearance on The Late Show with Steven Colbert, but his skeletons had already been revived.

Out of the woodwork came Gennifer Flowers, who has what she claims was a 12-year extra-marital affair with the former President in the 70s.

While Clinton has admitted to their affair (but denied the length of it) and Flowers always said it was consensual, she told Laura Ingraham on Tuesday that he did, by the standards of the #MeToo movement, sexually harass her before she eventually consented and their affair began.

Always waiting on the sidelines of the Clinton’s latest hypocrisy as well is Juanita Broadrrick, the woman who claims Clinton violently raped her forty years ago during his gubernatorial run in Arkansas and has stood by her story since she first spoke out in the 90s in the midst of the Paula Jones trial.

These women aren’t alone in making allegations of sexual impropriety against the former darling of the Democratic party. Kathleen Willey and Leslie Milwee have also accused the president of sexual assault, and it is rumored but has never been officially proven, that Clinton was expelled from Oxford for rape. Even Snopes has to call this one “unproven.”

The thought pieces have been appearing since Weinstein first went down and have continued this week in leftist publications that perhaps #TimesUp for the former President.

This is preposterous, of course, because nothing has changed since he was first accused of rape or since the details of the Lewinsky affair came to light.

All that’s changed is that the left is willing to sacrifice the Clinton legacy on the altar of “social justice” as they move forward with the #MeToo movement for whatever political ends that may bring.