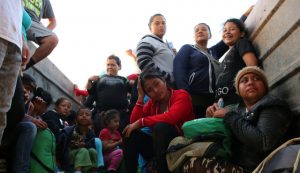 The transition team for President-elect Joe Biden has sent a warning to thousands of Honduran immigrants who are currently flocking to the U.S. border to seek entry into our country that they might end up having to wait in Mexico for a bit before their asylum claims are able to be processed.

An official who works with the transition team recently spoke to reporters at NBC News, telling them the incoming administration is set to prioritize the claims that have already been filed by immigrants who are currently waiting in Mexico under the president’s Migrant Protection Protocol. This measure requires that folks who are seeking asylum must stay in Mexico until their claims are processed.

“The situation at the border isn’t going to be transformed overnight,” the anonymous Biden team official told NBC News. “There’s help on the way, but now is not the time to make the journey.”

“We have to provide a message that help and hope is on the way, but coming right now does not make sense for their own safety … while we put into place processes that they may be able to access in the future,” the official said.

Thousands of migrants have begun traveling to the United States with the expectation that Biden will relax strict border policies put in place by President Donald Trump. A caravan of about 9,000 Honduran migrants is currently working its way to the U.S. border. On Friday, 2,000 members of the caravan overwhelmed Guatemalan authorities and pushed through border checkpoints without presenting identification.

So there’s a million things wrong with this, chief among them how this sort of migration might end up causing another third wave of COVID cases.

Then again, maybe that’s what the radical left wants so they can force everyone to stay in lockdown, ultimately leading to a collapse in the system and justification for extreme socialist policies.

I hope that’s not the case, but at this point, nothing would surprise me.