Biden Stumbles Through Weekend Campaign Visits With His Worst Gaffes Yet 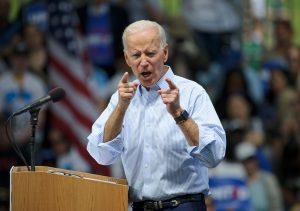 Every time I think we’ve hit the lowest possible lows with Joe Biden, the bottom drops out and he says something more wildly insane than before. I have never seen anyone so brilliantly talented in the area of making himself look like a horse’s ass. It’s incredible.

When I first read the Daily Wire’s headline that Biden had a “disastrous weekend” of fumbling through the Carolinas, I thought it must be an exaggeration. One of those sensational headlines the social media thought police like to flag conservatives for when we dare use anything more than a neutral, robotic tone to describe the idiocy going on over at Camp Democrat these days.

Surely Biden couldn’t have done much worse than squeezing the shoulders of a 10-year-old girl just weeks after promising to lay off the handsiness. Surely it can’t be worse than claiming that his proposed child tax credit would “put 720 million women back in the workforce” when the population of the entire country is only 330 million. Surely it can’t top any of the blunders I’ve had the pleasure of writing about out of this one-man gaffe machine all year long.

On Saturday, Biden participated in the Second Step Presidential Justice Forum in Columbia, South Carolina, where he raised eyebrows when he was asked by an African American woman what advice he would give to her about being pulled over by a police officer.

Biden responded: “If you were my daughter, you’d be a Caucasian girl, and you wouldn’t be pulled over.”

Seriously. He said that, and my eyes went as wide as dinner plates when I first read it.

Student asked Joe Biden what advice he’d give her about being pulled over by the police if she was his daughter.

Biden: “If you were my daughter, you’d be a Caucasian girl, and you wouldn’t be pulled over.” pic.twitter.com/54fP5Z6BD2

What in the holy fires of hell is this dude smoking?!

In spite of Biden’s apparent snubbing of mixed families, which is how I took his idiotic statement that this woman would have to be a white girl in order to be his daughter, anyway, he proceeded to try to salvage the statement with an indictment of institutionalized racism in the country. And what’s worse, the crowd didn’t go straight to booing the man off the stage and lobbing cabbages at his head as they should have—these people laughed and applauded. So maybe whatever Biden is smoking was also rigged up to the ventilation system. It’s a theory.

Later on Saturday, Biden participated in a town hall event in Florence, South Carolina, where he made a series of false statements and gaffes.

During one point in his speech, Biden falsely claimed that Trump “said that migrants seeking refuge in America were – ‘these aren’t people, these are animals.’”

Even The Washington Post, which, if often highly critical of the president, acknowledged that Trump’s remarks were about MS-13 gang members, not migrants.

MS-13 is widely considered to be among the most ruthless street gangs in the world as its members often beat their victims to death with baseball bats, stab them with knives, or chop them up with machetes. The criminal organization is largely comprised of illegal aliens from Central America.

If the Washington Post has more dignity than you, you know you’ve really sunk your battleship, buddy.

Democrat Joe Biden lies about Trump: "He said that migrants seeking refuge in America were 'these aren't people, these are animals'"

Trump did *not* call migrants "animals"

That’s not all, folks. This freakshow just keeps on rollin’.

Later on in the town hall, Biden invented a competitor in the 2020 Democrat pool out of thin air, suggesting that a candidate named “Cisneros” was running. While I’d give any average Joe off the street a pass on this one due to the sheer volume of Dem candidates this go-round, Joe Biden is one of them!  How on earth does this happen?

As he continued to stumble through his statement, he also mistakenly referred to the Hispanic community as “African.” Seriously.

Biden suggests that there is someone named "Cisneros" running for president

The reasonable explanation is that Biden confused candidate Julian Castro with California Rep. Gil Cisneros. My theory is that the corn kernels he put in his ears as a kid made it to his brain and are finally starting to pop.

And, lastly, at an event in Durham, North Carolina, on Sunday, Biden stated that “China’s not a problem.”

As the Daily Wire points out, “Biden has repeated this false claim numerous times this year even though it’s widely accepted in the U.S. intelligence community and by experts on the issue that China presents the greatest economic and military threat to the United States.”

By my count, this is at least Joe Biden quadrupling down:

Biden stands by past China comments: "China's not a problem"pic.twitter.com/SmB4mlmfOo

If Joe Biden isn’t going to do the right thing and drop out of the race and go establish residence in the cuckoo’s nest, then I’m just gonna go right on ahead reporting (and laughing my teeth out at) every gaffe he gives us.