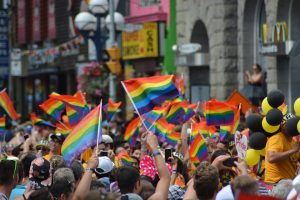 The White House apparently wanted to kick off Pride Month with a bang, taking a few big shots at both former President Donald Trump and red states they claim have passed anti-transgender bills in their statement commemorating the celebration.

“After four years of relentless attacks on LGBTQ+ rights, the Biden-Harris Administration has taken historic actions to accelerate the march toward full LGBTQ+ equality,” the White House went on to say in their statement released on Tuesday.

“From protecting the civil rights of every LGBTQ+ American, enabling all qualified Americans — including transgender Americans — to serve their country in uniform, ensuring that LGBTQ+ Americans are leaders at every level of the federal government, to protecting and defending the human rights of LGBTQ+ persons around the world, the Biden-Harris Administration is a consistent and reliable partner in the fight for equality at home and abroad,” the White House went on to add.

In his proclamation, Biden referenced how states have “actively” targeted transgender youth through legislation as lawmakers crack down on athletes not competing in sports as their biological gender. He also touted how almost 14% of his 1,500 federal agency appointees identify as gay.

Biden used his first address to a joint session of Congress in April to push lawmakers to pass the Equality Act. His first-day executive order directing the federal government to counter sexual orientation and gender identity discrimination, too, has reversed Trump-era reforms, including the former president’s ban on transgender military personnel openly serving in the armed forces. The White House on Tuesday promoted as well the State Department’s decision permitting pride flags to be flown outside U.S. embassies and consulates around the world.

Gay rights advocates have routinely been critical of former President Donald Trump over his policies that they say perpetuated inequality, including the Justice Department backing bathroom bills and his alleged amplification of anti-gay supporters.

Pride Month is held in June as it coincides on the anniversary of the Stonewall Inn riots that took place on June 28, 1961. Several days of violence were sparked by an “anti-gay” police raid of a Mafia owned club located in the Greenwich Village of New York City.