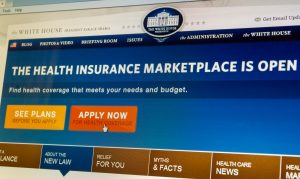 During an AARP forum in Iowa yesterday, the former vice president and 2020 Dem hopeful unveiled his campaign’s healthcare plan using some language eerily reminiscent of the poorly-named Affordable Care Act (ACA) he helped former president Barack Obama pass back in 2010.

when discussing how his “public option” proposal differed from Medicare for All.

“How many of you like your employer-based health care? Did you think it was adequate?” Biden asked forum attendees, highlighting the difference between his plan and the “Medicare For All” plans of opponents like Bernie Sanders. “Now, if I come along and say, ‘finished, you can’t have it anymore,’ well that’s what Medicare for All does. You cannot have it, period.”

Biden’s plan, which his campaign estimates will cost just $750 billion over the first ten years of implementation, would oh-so-benevolently allow citizens to choose between private or public health insurance.

Golly gee, where have we heard that before?

Oh yeah, that’s the hook Obama used right before regulating the private healthcare plans of millions of Americans out of existence.

Of course, we can totally trust Creepy Uncle Joe in creating a new “public health insurance option.” I’m sure he’s completely telling the truth and that his healthcare plan, should the skies be darkened and it be signed into law, there will be no unintended consequences like the Healthcare Bill That Must Not Be Named.

After all, he’s a politician—why would he lie?