Biden Has Announced Executive Actions On ‘Epidemic’ Of Gun Violence 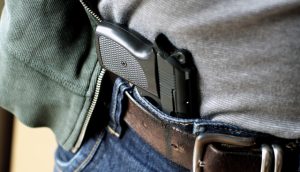 President Joe Biden has announced his first gun control measures since entering the White House back in January, revealing a half-dozen executive actions on Thursday designed to address gun violence across America, which he referred to as an “epidemic and an international embarrassment.”

“It is actually a public health crisis,” Biden stated during the reveal. He then greeted the families of gun violence victims and reassured them that “We’re absolutely determined to make change.”

But the announcement underscores the limitations of Biden’s executive power to act on guns. They include moves to tighten regulations on homemade guns and provide more resources for gun-violence prevention, but fall far short of the sweeping gun-control agenda Biden laid out on the campaign trail.

Biden is tightening regulations of buyers of “ghost guns” — homemade firearms that usually are assembled from parts and milled with a metal-cutting machine and often lack serial numbers used to trace them. It’s legal to build a gun in a home or a workshop and there is no federal requirement for a background check. The goal is to “help stop the proliferation of these firearms,” according to the White House.

The Justice Department will issue a proposed rule aimed at reining in ghost guns within 30 days, though details of the rule weren’t immediately issued.

A second proposed rule, expected within 60 days, will tighten regulations on pistol-stabilizing braces, like the one used by the Boulder, Colorado, shooter in a rampage last month that left 10 dead. The rule will designate pistols used with stabilizing braces as short-barreled rifles, which require a federal license to own and are subject to a more thorough application process and a $200 tax.

“The department also is publishing model legislation within 60 days that is intended to make it easier for states to adopt their own “red flag” laws. Such laws allow for individuals to petition a court to allow the police to confiscate weapons from a person deemed to be a danger to themselves or others,” Newsmax says in their report.

“The department also will begin to provide more data on firearms trafficking, starting with a new comprehensive report on the issue. The administration says that hasn’t been done in more than two decades,” the report continues.

At the end of the day, the strategy here is to make it so difficult to purchase a firearm that the process will discourage people from wanting to buy guns. This way they can leave the Second Amendment in tact, but still manage to gain control over gun rights.