Biden Falls Three Times Trying To Get On Air Force One 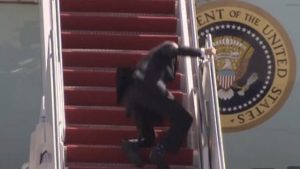 It seems that President Joe Biden just continues to provide more and more evidence that he is suffering from some sort of cognitive decline each and every time he comes out of the White House or opens his mouth to talk.

Biden fell not once, not twice, but three times trying to go up the steps to board Air Force One on Friday. The President was preparing for a visit to Atlanta to talk with community leaders about the tragedy that unfolded earlier this week in the city.

Videos posted online showed Biden, 78, repeatedly stumbling while trying to walk up the stairs as he grasped the rail the entire time. Eventually Biden was able to get up the stairs and he turned around and gave a salute.

Biden’s fall comes after he referred to Vice President Kamala Harris as “President Harris” this week during a speech and did not correct himself. Russian President Vladimir Putin responded to an attack from Biden this week by saying, “I would say to him: I wish you good health.”

Biden’s fall comes just months after he fell and fractured his foot after he was allegedly chasing around one of his dogs after he got out of the shower.

“What happened was I got out of the shower. I got a dog and anybody who’s been around my house knows — dropped, little pup dropped a ball in front of me. And for me to grab the ball,” Biden said when asked about the incident during an interview with CNN. “And I’m walking through this little alleyway to get to the bedroom. And I grabbed the ball like this and he ran. And I’m joking, running after him and grab his tail. And what happened was that he slid on a throw rug. And I tripped on the rug he slid on. That’s what happened. Oh man, not a very exciting story.”

Or, maybe, it wasn’t the dog’s fault at all. Perhaps his mobility and fine motor skills have exited stage left, along with other aspects of his mental acuity. That’s not to sound mean or harsh. It happens to people his age all the time.

What’s sad is if he really is having issues and he was pushed into running for president. That’s a really sick thing for Democrats to do, but nothing surprises me anymore.