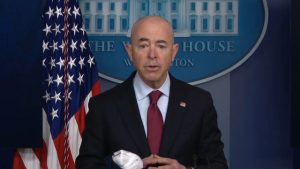 Homeland Security Secretary Alejandro Mayorkas has come out and doubled down on the Biden administration’s use of Title 42, basically tossing aside recent criticism he’s received from a former senior State Department official who has called this choice “illegal” and “inhumane,” going on to insist during a chat with Yahoo News Tuesday that it “is not an immigration policy that we in this administration would embrace,” the policy is a “public health imperative.”

Title 42 was first used by former President Donald Trump and was then kept going by the Biden administration to help boot out hundreds of thousands of migrants who crossed over the southern border illegally from Mexico, is actually a rather obscure public health authority that gives the government power to prevent noncitizens from coming into the country during a pandemic.

When the Trump administration first invoked Title 42 early in the coronavirus pandemic last year, the Centers for Disease Control and Prevention issued an emergency order that permitted immigration officials to quickly expel mostly Mexican and Central American migrants without giving them an opportunity to apply for asylum or other protections in the U.S.

Even though public health experts and human rights activists have insisted that the policy be revoked, the Biden administration has instead defended it in federal court.

There have been 938,045 migrants expelled from the U.S. under Title 42 between October 2020 and August 2021, including more than 7,000 Haitians who tried in late September to cross the border in Del Rio, Texas, according to the U.S. Customs and Border Protection.

An outgoing senior adviser on the State Department’s legal team, Harold Koh, recently wrote a scathing internal memo insisting that the Biden administration’s use of Title 42 to expel migrants violates U.S. and international laws against returning people to countries where they fear persecution, death, or torture. He wrote that expulsions to Haiti, which is experiencing widespread violence and food insecurity, are “inhumane” and “not worthy of this Administration that I so strongly support,” Politico reported last week.

The criticism offered by Koh was in addition to protests by Daniel Foote, who serves as the administrations special envoy to Haiti, who ended up stepping down from his position due to the mass expulsion that took place in September.

When Mayorkas was asked to give his response to the Koh memo, he said it is “heartbreaking” that a “material percentage” of migrants from the nation of Haiti who recently arrived at the southern border will now be expelled due to Title 42, but noted that this kind of action is “necessary as a matter of public health imperative.”