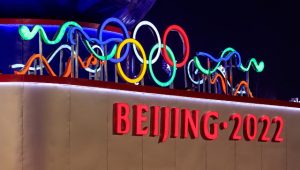 According to White House Press Secretary Jen Psaki, the Biden administration is not thinking about a boycott of the 2022 Winter Olympics in Beijing, which is a change in tune and tone from comments that were made by the State Department on Tuesday.

“Our position on the 2022 Olympics has not changed,” Psaki said to a group of reporters. “We have not discussed and are not discussing any joint boycott with allies and partners.”

Psaki then explained that we “consult closely with allies and partners at all levels to define our common concerns and establish a shared approach, but there is no discussion underway of a change in our plans regarding the Beijing Olympics from the United States’ point of view.”

The day before, a State Department spokesman indicated in an exchange with reporters that the U.S. was discussing whether to skip the Olympics in Beijing as part of a boycott with allies.

“It is something that we certainly wish to discuss and that it is certainly something that we understand that a coordinated approach will be not only in our interests but also in the interests of our allies and partners,” State Department spokesman Ned Price said. “So this is one of the issues that is on the agenda both now and going forward, and when we have something to announce, we will be sure to do that.”

Later that evening, however, Price sought to clarify the remarks , tweeting that the Biden administration has no announcement regarding the 2022 Olympics “but we will continue to consult closely with allies and partners to define our common concerns and establish our shared approach to” China.

One senior official for the State Department made an appearance on CNBC and said, “Our position on the 2022 Olympics has not changed. We have not discussed and are not discussing any joint boycott with allies and partners.”

Some in the Republican Party want Biden to do a boycott of Beijing due to the fact that the Chinese Communist Party has repressed the Uyghurs and the crackdown of rights in the Hong Kong.