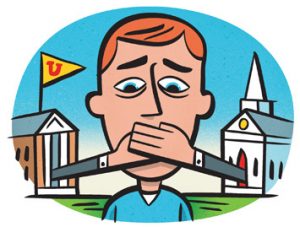 We are rapidly becoming victims of the “Logogogues” (pronounced, Law-go-GOGS). They have invaded and infested the majority of our information disseminating vehicles. Their strength lies in their mouth. Continued exposure to their attacks results in a gradual, but effective brainwashing.

What in the world are logogogues? These creatures are not aliens from another planet, or a new species of insect, or a new virus. They are Word Tyrants — persons who attempt to manipulate our thoughts by controlling our language.

George Orwell, with uncanny insight, told the story, in his classic novel, “1984”, of a society in which a bureaucratic elite manipulated the meaning of words in order to manage the minds of the populace. All over Orwell’s make-believe city of Oceania was posted the party slogan, “WAR IS PEACE,” “SLAVERY IS FREEDOM,” “IGNORANCE IS STRENGTH.” The agency responsible for waging war was entitled “The Ministry of Peace.” The place where interrogation, brainwashing, and punishment was rendered was called “The Ministry of Love.” Orwell called this semantic manipulation, “Newspeak.” Its purpose was to eliminate all other forms of thought except that which “Big Brother” designed, decreed, and deployed.

Unfortunately we have ignored Orwell’s warnings and as a result have become the targets of the greatest assault of Newspeak that history has ever witnessed. Logogogues practice their deceitful word manipulation at all levels. A broken home is now a dysfunctional family; a bum is a homeless person; a crazy person is now mentally ill; failure has been replaced by deferred success; being fat has been replaced by an enlarged physical condition caused by a completely natural genetically-induced hormone imbalance. The ghetto is now referred to as an economically disadvantaged area; the handicapped are now called the physically challenged; the housewife is now called a domestic engineer; illegal aliens – are now named undocumented immigrants. A swamp is now called wetlands; sexual perversion is now called alternative lifestyles; old people are now the chronologically challenged.

In the area of government, politicians call for revenue enhancement instead of a tax hike. The theft of property, the repression of the free market economic system, and the redistribution of wealth is called social security. They fling around such terms as compassion, which means tax money to buy votes; demonstration, which in the words of black economist Thomas Sowell, is “a riot by people you agree with, while mob violence is a riot by people you disagree with.”

The new political correctness involves “logogogues” at the top of their game. For example, we hear about  multiculturalism, diversity, fairness, equity, inclusion, inclusiveness, opportunity, and empowerment, which really means  racial quotas, discrimination against whites, special rights and preferential treatment for protected minorities, and the exclusion of white males in particular. Then we hear the liberal news media speaking about tolerance, inclusion, acceptance, open-mindedness, understanding, which being translated means basically approval and endorsement of perverse, deviant lifestyles. The list of today’s political correct words is almost endless.

Logogogues call the dehumanizing perversion of pornography “adult entertainment.” Sodomy is called being “gay,” “homosexuality,” or “an alternate sexual preference”. Drunkenness is called “alcoholism”. Adultery is called “having an affair.” Fornication is called being “sexually active.” Dope addicts are those who have become “chemically dependent.” Moral purity is labeled “Victorian prudishness.”

Values clarification is the term modern educators use to describe the replacement of a school child’s moral base with one that is in keeping with the amoral world view of the educational system. According to Values Clarification pioneer, Sidney Simon, the idea is to stop parents and teachers from defining for children “their emotional and sexual identities” and to keep them from “fostering the immorality of morality.”

The key to victory in this war of words is found in the field of broadcasting. We do not mean by this the use of television and radio, but in the active, aggressive broadcasting of the whole counsel of the Word of God, by the whole body of Christ’s Church, by every means possible. Silence in respect to the proclamation of the truth is not golden but yellow and deadly! We must speak forth the truth now or forever lose our peace!

He is the author of 46 books, a conference speaker and leader of international mission’s training. He is married to Anne and they have three grown children, five grandchildren, and five great grandchildren. They are members of Grace Fellowship of Augusta, Georgia and make their home in North Augusta, South Carolina. He can be found at tridm.org