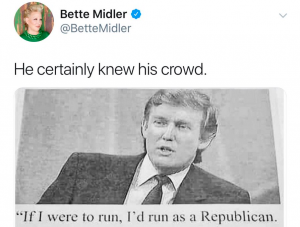 “Sorry, not sorry” might be a fun hashtag for social media posts and stories, but it’s not a great strategy when you’ve actually done something you should legitimately apologize for.

I feel like I shouldn’t have to explain this, especially not to a sage old dame like Bette Midler, but here we are.

Setting herself apart from the rest of the trendy/aging/liberal set of showbiz veterans on social media, Bette Midler upped the anti-Trump ante by sharing a certain meme with her 1.6 million Twitter followers.

Nothing newsworthy there, right? Some old Broadway broad shared a meme? Fair enough, but it was this meme, courtesy The Daily Wire’s Amanda Prestigiacomo:

Yes, that’s right, that stupid meme again. The one that was debunked practically the minute it was first tossed into the cesspool of the interwebs. Even super lefty fact-checkers like Politifact gave the thing a “Pants On Fire” rating.

And, of course, being the very model of repentance, Bette offered this non-apology:

I apologize; this quote turns out to be a fake from way back in ‘15-16. Don’t know how I missed it, but it sounds SO much like him that I believed it was true! Fact Check: Did Trump say in '98 Republicans are dumb? https://t.co/NY9s6V49el via @rgj

If you ask me, Bette’s weak apology came about 27,000 “likes” too late, and she continues to dig herself deeper.

Seemingly addressing her carelessness in circulating such a commonly discounted meme, Middler proceeded to blame Trump himself for her own idiocy because he “lies” so much:

Yes, one must always check the quotes. That should take up, oh, maybe 23 of the 24 hours in the day? Because there are SO MANY LIES, most of them generated by Trump himself, that the task of separating the truth from the lies is impossible. Which is just how he likes it. #CHAOS

Honestly, I’m willing to cut Bette a tiny bit of slack here. Fact-checking is hard, y’all. It only takes half a second to hit a “share” or retweet button, but it takes a whopping ten or more seconds to make the schlep all the way over to Google and read the first couple of search results.

Who’s got time to do all of that?!