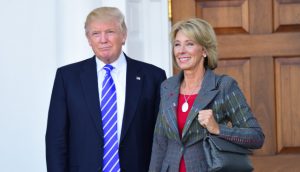 Former Education Secretary Betsy DeVos recently stated that liberals will take action to ensure the survival of critical race theory by rebranding it, even if it is banned from being taught in schools.

The comments come from a column that DeVos posted on Fox News Friday.

“Because wokeness is the left’s religion, ‘banning’ critical race theory or the 1619 Project won’t fix the problem,” she went on to write. “The liberal education establishment will simply rename, rebrand, or repackage these insidious ideas to get around so-called bans.”

Critical race theory is defined by the Encyclopedia Britannica as the concept in which race is a socially constructed category ingrained in American law intended to maintain social, economic, and political inequalities between whites and nonwhites. It holds that the U.S. society is inherently or systemically racist.

“We must equip parents themselves with the tools to hold schools accountable for their programming decisions — to be able to see what is being taught and differentiate between activist and academically oriented schools before they have to make an enrollment decision,” the former Education Secretary continued.

“Schools, in turn, will find themselves under a meaningful spotlight for the first time, and those who don’t want to alienate prospective parents (and the substantial formula funding that comes with their kids’ enrollment) may finally have an incentive to veer away from political extremism on their own,” she said.

“There’s the potential for a new fault line in America’s ever-growing debate about parental rights: a schism between policymakers who believe parents have a right to know what’s being taught in public K-12 schools, and those who do not,” DeVos added.

Critical Race Theory is a weapon of division in the hands of the radical left. They have wielded it masterfully over the course of the last decade and a half, driving a wedge deeply between people of different ethnicities, separating us by what makes us different rather than uniting us by our commonalities.

It’s a force of evil that liberals want to use to brainwash your children. It’s time to consider alternatives to public education, folks.