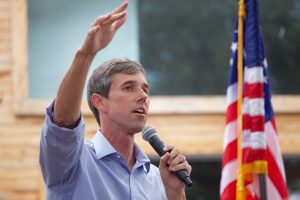 You know how the saying goes: if at first you don’t succeed, demand a do-over.

While Beto O’Rourke isn’t having a public hissy fit akin to a little brother whose Luigi just died for the thousandth time in a row, his approach to his rapidly declining voter support is no less unimpressive.

After placing nearly dead last in poll after poll ahead of the 2020 primaries, the Texan Democrat is considering a little bit of re-branding to “reintroduce” a bigger, better campaign.

“O’Rourke plans to step up his national media appearances after skipping most of that kind of exposure in recent months. He is scheduled to appear on MSNBC’s ‘Rachel Maddow Show’ on Monday night and ABC’s ‘The View’ the next day,” the Associated Press reports. “He’s also set to offer more concrete policy plans on top issues. So far, he’s issued just one, on climate change.”

The AP refers to Beto’s climate change proposals that were quickly decried for what they were: little more than a softened version of the “Green New Deal”.

Campaign aides say O’Rourke will have a “quiet period” for a week or so to cook up a better approach before the primaries this summer.

Though denying that this ploy will result in a “Beto 2.0”, Beto admits that his campaign has been lackluster: “I think, in part, I was just trying to keep up when I first started out. I really feel like I’ve found my rhythm and my pace, and I just feel comfortable, and I feel like this is what I’m supposed to be doing.”

Garnering the support of less than 2% of voters in the latest Monmouth University poll, Beto’s going to have to invent a cure for cancer to save his campaign.

Although the AP charitably pins Beto’s 2020 failure on campaign “disorganization,” there are several deeper issues with the guy that maybe—just maybe—cost him the nomination.

Like, say, talking out of both sides of his mouth to supporters about campaign contributions, making cocky remarks about giving to charity, or fantasizing about running over children, not to mention his increasingly extreme leftist stances on nearly every issue.