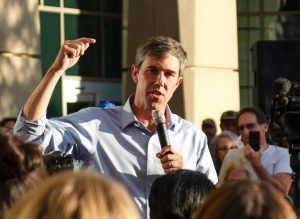 Surprise, surprise. Beto O’Rourke walking back the egregious claims he made at the CNN LGBT Townhall last Thursday, including his statement to host Don Lemon that religious organizations should lose their tax-exempt status for opposing same-sex marriage.

LEMON: Congressman, I want to ask you a question. This is from your LGBTQ plan, and here’s what you write. This is a quote. Freedom of religion is a fundamental right but it should not be used to discriminate. Do you think religious institutions, like colleges, churches, charities, should they lose their tax-exempt status if they oppose same-sex marriage?

O’ROURKE: There can be no reward, no benefit, no tax break for anyone or any institution, any organization in America that denies the full human rights and the full civil rights of every single one of us. And so as president, we’re going to make that a priority and we are going to stop those who are infringing upon the human rights of our fellow Americans.

In response to the startling plan out of Team Beto, President Donald Trump told supporters at the Value Voters Summit over the weekend that O’Rourke is a “wacko,” and that Trump would “never allow the federal government to be used to target, harass, or punish communities of faith.”

Of course, after even Democrats lambasted him for his extremist stance, O’Rourke ever-so-subtly clarified his statement to cover only organizations who “provide public services:”

This from a man who’s used his office to stoke hate, fear, and discrimination. Who tried to ban Muslims.

Anyone can believe what they want —but organizations that discriminate when they provide public services should not be tax-exempt.https://t.co/9S9E5n0CiU

That’s a far cry from the ominous declaration that “any institution” that opposes same-sex marriage could have their tax-exempt status revoked, not just those providing public services.

“So, for example, an adoption agency run by a religious organization that denies the adoption application of a same-sex couple solely because they oppose gay marriage, would lose their tax-exempt status,” she continued. “A church that declines to marry a same sex couple would not.”

As the Daily Wire reported, even token gay candidate Pete Buttigieg said Beto’s plot to revoke tax statuses went too far. “I agree that anti-discrimination law ought to be applied to all institutions,” Buttigieg said in an interview with Jake Tapper on State of the Union. “But the idea you are going to strip churches of their tax-exempt status if they have not found their way toward blessing same-sex marriage, I’m not sure he understands the implications of what he’s saying.”

Saloni Sharma, a campaign spokesperson for Sen. Elizabeth Warren, chimed in, telling the Associated Press on Monday that Warren also would not touch the tax-exempt status of churches and organizations who do not affirm the LGBT lifestyle:

“Religious institutions in America have long been free to determine their own beliefs and practices, and she does not think we should require them to conduct same-sex marriages in order to maintain their tax-exempt status.”

Beto will go toe-to-toe with his fellow Dem hopefuls in yet another debate (groan). Let’s see how he handles it. Or watch paint dry. Your choice.