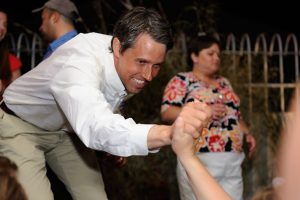 in a move that should surprise absolutely no one, Beto O’Rourke was recently asked to explain why he gives so little money to charity as he is, as many far-left Democrats somehow find themselves to be, vastly wealthy.

The donation of himself to America is beyond measure.

Beto, a slave to political trends, apparently, has joined Bernie Sanders in releasing the last 10 years of tax returns, which indicated that while he has not in fact colluded with the Russians or tweaked numbers to try to buy an NFL team, he has been a little stingy when it comes to charitable giving.

The Dallas Morning News reports that when a college student recently asked O’Rourke why he gave so little to charity, considering he made seven times more than his sister and yet she herself was far more generous, he replied with something along the lines of, because I’m giving everyone me.

I’ve served in office since 2005. I do my best to contribute to the success of my community, of my state, and now, of my country. There are ways that I do this that are measurable and there are ways that I do this that are immeasurable. There are charities that we donate to that we’ve recorded and itemized, others that we have donated to that we have not. But I will tell you, I’m doing everything that I can right now, spending time with you — not with our kiddos, not back home in El Paso — because I want to sacrifice everything to make sure that we meet this moment of truth with everything we’ve got.

I’m pretty sure the vast majority of the hundreds of thousands of homeless and impoverished Americans would probably prefer a hot meal to Beto, but whatever.

At a town hall at the University of Virginia tonight, a student asked Beto O’Rourke why her sister, a recent college graduate, makes much less money than he does but has donated more to charity than the amount that he reported on his 2017 tax return. His response: pic.twitter.com/yNCK58KjTD

And yes, this is coming from the same dude who is always lecturing the rest of us on how to spend our own money and fully advocates for government intervention to make sure that wealth is more “equal.”

“The unprecedented concentration of wealth, power and privilege in the United States must be broken apart. Opportunity must be fully shared with all. We must all have the opportunity to succeed. Together. As one country,” he tweeted last month.

The unprecedented concentration of wealth, power and privilege in the United States must be broken apart. Opportunity must be fully shared with all. We must all have the opportunity to succeed. Together. As one country.

So…could we all just run for president and call it even, Beto?