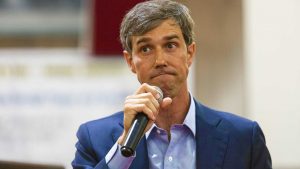 But when it comes to sharing the massive funds he’s accumulated throughout his hard-fought campaign, he has no interest in sharing.

Karl Marx is rolling over in his grave, Beto! What are you doing?

On Monday, Texas Rep. Beto O’Rourke announced that despite the alleged pleas from other Democratic senatorial candidates for him to share some of the funds he has accrued for his campaign, he has no intention to do so, even though their races may be closer than his race against Senator Ted Cruz (R-TX).

According to The New York Times, Democrats feel that they would have a better chance in winning close Senate races in Missouri, Florida, and Indiana if O’Rourke would share the wealth.

O’Rourke has accumulated a $38.1 million war chest, the largest in Senate history; he informed reporters he will spend it all before Election Day. He sniffed that if his donors want to offer additional support to other candidates, they can fork over more cash, according to The Washington Examiner. O’Rourke said, “I’ve got to honor the commitment that those who’ve contributed to this campaign have made to me, and their desire that we use this to win this election. If they want to contribute to someone else, they should do so. If they want to contribute to a campaign that’s going to win this historic victory for Texas and the country, then I’m grateful for the contribution and I’m going to make the most of it, so that’s what we’re focused on.”

Asked if he would share his war chest, O’Rourke answered, “No. I’m focused on Texas. Most of our contributions have come from Texas. All of them have come from people. Not a dime from PACs. Folks contributed to this race because they want us to win this race. If they want to contribute to another campaign, of course they’re welcome to do that. No, we’re going to spare no expense. We will bare any burden to make sure that we deliver for this state and for this country. That means a victory on the 6th of November.”

This is, of course, not atypical of progressive politicians of any sort. From Elizabeth Warren and Bernie Sanders to Fidel Castro and Hugo Chavez, socialist leaders have a long history of bold support for sharing the wealth–other people’s wealth, that is.

While our American Marxists get rich selling books and sitting in the Senate, they campaign for policies that tax hard-working Americans and the corporations that employ them and keep our economy strong and free.

Beto’s opponent, Ted Cruz, who stands in stark opposition to his young challenger as one of the most conservative members of the Senate, was quick to point-out this typical double-standard:

“It would seem that if the Democratic Party wants to embrace the principles of socialism, they should take the money his campaign has raised and give it to all the campaigns that haven’t raised any money — and I wouldn’t put it past them. I’ll let Democratic Party strategists worry about their own party’s strategy,” he said.