Beto O’Rourke Explains Why He Spoke Spanish During Debate; Gets Slammed By ‘The Daily Show’ 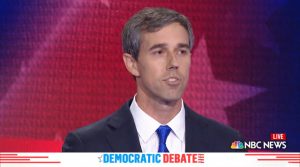 The first Democratic presidential debate aired on Wednesday night and, as many expected, it was a complete and total dumpster fire that proves Trump has little to worry about when it comes to his re-election campaign next year.

One of the strangest moments of the night was after Beto O’Rourke was asked to answer a question about tax rates, where, in mid-answer, he switched to speaking Spanish.

He later clarified why he did that, which ended up getting him slammed by “The Daily Show.”

Speaking with Alisyn Camerota on CNN, the former senatorial candidate said he spoke Spanish to be inclusive of everyone in America who has been marginalized.

“You peppered some of your responses last night with Spanish, which you speak and were addressing, I guess, people who were listening who speak Spanish,” Camerota said on the program. “So let me play it for you, because the question you were asked was about, I think, the top tax rate and you answered part of it in Spanish.”

Camerota then played the clip of Beto essentially dodging the question the moderator gave him about tax rates by speaking Spanish.

“This economy has got to work for everyone, and right now, we know that it isn’t,” O’Rourke said in English. “And it’s gonna take all of us coming together to make sure that it does.”

After the clip ended, Camerota asked O’Rourke to give an explanation of why he chose to answer the question in Spanish. Here’s his response:

I think it’s important that we listen to and speak to everyone in this country, including those who happen to speak, or prefer to speak Spanish. I’ve held more than 160 town halls and answered thousands of questions, most in English, but some in Spanish. If this Democracy is going to work, if our economy is going to work for everyone, then everyone has to be included, especially those who have been marginalized and those who have not been at the table. I want to make sure their voice is heard, I want to make sure that their vote counts as well. Coming from El Paso, Texas, in order for me to be effective when I was a member of Congress there, I needed to be able to listen to and speak to everyone in both English and Spanish. I want to do that as a candidate, I want to do that as president as well.

Beto O'Rourke on speaking Spanish: “I think it’s important that we listen to and speak to everyone in this country, including those who happen to speak, or prefer to speak, Spanish… If this democracy is going to work… then everyone has to be included.” https://t.co/Ia1QPhEVsZ pic.twitter.com/VHInbr8nH8

And here’s how “The Daily Show” responded to all the hoopla.

When Dad says "Hola, como estas?" to the waiter at the Mexican restaurant #DemDebate pic.twitter.com/64FY2LV6kp

This is a prime example of what pandering looks like, folks. Usually the left at least tries to couch it a bit in something so it’s not so obvious, but Beto marches to the beat of his own drummer, as we all well know.

After this debate, President Trump is likely feeling pretty confident he’s going to be sitting in the White House for another four years, and honestly, the evidence backs that confidence up pretty well at this point.