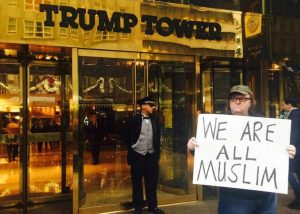 The word hypocrisy comes from the Greek theater and referred to the practice of putting on a mask and playing a part on stage. What we now call actors were originally called hypocrites. The Greek word means literally, “to judge under,” and was used of someone giving off his judgment from behind a screen or mask. The true identity of the person is covered up.

Here is a perfect description of modern Hollywood, with a few exceptions — “someone giving off his (her) judgment from behind a screen or mask.”

Whether it’s the Golden Globes, the Grammys, the Academy Awards, or the People’s State of the Union rally, the celebrities take every opportunity to “give off their judgment.”

Just last night, the night before President Donald Trump’s first State of the Union address, the two-faced hypocrites whom the media addresses as celebrities gathered in New York City for a public rally called, “People’s State of the Union.” This was intended to serve as counter-programming to the President’s State of the Union address. The three-hour public event was sponsored by left-wing organizations including Planned Parenthood and MoveOn.org. Many of the celebrities at Monday night’s event were also present at the anti-Trump Women’s Marches across the country earlier this month on the first anniversary of the president’s inauguration.

My vote for the best hypocrite at the People’s State of the Union goes to Leftist film-maker, Michael Moore. In his speech, he revealed the necessity of removing and replacing virtually everything that has made America great and free.  He pontificated that it is not enough to remove Trump and Pence. He said, “The need to remove him — and also any Democrat who is in the way of removing him — that is, at this point, a moral imperative for each and every one of us,” he added. “Removing him, and Pence, and the whole disgusting lot of them… still won’t be enough. We must remove and replace the system and the culture that gave us Trump in the first place.”

“As we seek to rid ourselves of Trump, we must also cleanse our American soul of our white male privilege,” Moore continued.

Moral imperative! Most of these people are postmodernist relativist who do not believe there are any moral absolutes. Talk about self-righteous hypocrisy!

As the Hollywood elites gather in their self-congratulatory events, arriving in limousines, dressed in their fancy, seductive dresses with their #MeToo badges in plain view, those given the platform make speeches for equality and diversity, all the while they will continue to look down their noses at anyone who does not share their values.

These liberals, along with ever other American feminist, are quick to condemn overt sex discrimination, and rightly so. Yet they grant a free pass to the massive oppression of women in Islamic countries. Hundreds of millions of women live in cultures that oppress, suppress, abuse and mistreat women culturally and legally.

The flood of a million Islamic refugees into Europe has resulted in vast increases in rape, verbal harassment and groping of women. Yet we do not see any Hollywood celebrities organizing a single march or making even a slight remark. Why are they not massively protesting Sharia law in Europe, or going for the head of the perpetrators in Saudi Arabia, Indonesia, and Pakistan? Does the obligation not to oppress women apply only to non-Muslims?

Ben Shapiro opines, “Yes, the town that brought you the casting couch and the X-rated film now proclaims that it is the leading edge on behalf of female empowerment. All it took was the worst scandal in modern Hollywood history to make that happen.”

But now we’re supposed to believe that Hollywood has the high moral ground and has something to tell the rest of us about sexual abuse.

Super successful actor, Matt Damon, while getting “filthy rich” shooting people on the movie screen, wants gun control. In fact, he’d like to see the weapons all but eliminated. In July 2016, Damon was on a press junket when he told reporter Sarah Thomas he wished the US would essentially ban guns, the same way Australia did in the 1990s.

Damon is hardly the only actor to advocate for reformed gun laws, while simultaneously making an enormously lucrative living wielding the weapons on screen. Charlize Theron has long been openly anti-gun, having almost been shot by her own father, who was himself shot and killed in self-defense, by her mother. Yet we see Theron starring in the film Atomic Blonde, as the armed an lethal heroine. Someone remarked that she had a “body count higher than her chain-encrusted high-heeled boots.”

Liam Neeson’s “Taken” series of films features him as a middle-aged, retired special agent that is virtually a one-man killing machine. Yet Neeson, perhaps more than any celebrity, has declared himself not only pro-gun control, but anti-Second Amendment, full stop. “It is the right to bear arms that is the problem,” he claimed. America’s gun culture, “[is] a f***ing disgrace.”

This is Hollywood’s unique gift: limitless gall, immeasurable arrogance and the “STAR” superiority mentality, coupled with a complete lack of morality.

So entertainers, stop giving off your judgment from behind a screen or mask and GET REAL!

No one’s willing to say it, but there are some who just need to die for what they’ve done to us and our country
January 24th, 2022 DC Dirty Laundry