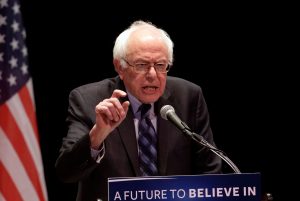 Let’s face it, folks. “Bernie Demonstrates He Doesn’t Grasp Even Basic Economic Principles” is something of a stale headline. Nearly every word out of the guy’s mouth demonstrates that. What else is new?

But this latest gaffe is simply unignorable. Just consider this part of a running gag or another installment in the anthology of crazy Bernie.

At a recent rally, Sanders ripped into professional baseball, arguing that a country that pays athletes such extravagant wages should be able to pay teachers better.

If we are a nation that can pay baseball players hundreds of millions of dollars, don't tell me we can't afford to pay teachers the salaries they deserve. pic.twitter.com/pQVix0iX9a

Oh, Bernie. It seems like there’s some crucial information he’s missing here, right? How has this man made it through over seven decades of life and a career in public service (I’m using that term very generously) with a brain that comes up with this kind of nonsense?

Can someone with access to Sen. Sanders please inform him that “the nation” doesn’t pay baseball players hundreds of millions of dollars? Their employers (who make bajillions off of ticket sales, licensing fees, and ten-dollar beers) pay them.

If professional baseball teams were suddenly moved to the same funding model as public schools and forced to survive off of what they could squeeze out of the district taxpayers, then I could see this comparison making sense.

Thankfully, the fine folks of Twitter were ready to knock this one outta the park:

My math teacher told the best dad jokes on the face of this earth. He probably could have made more as a comedian, since “this nation” also pays comedians better than it pays teachers, too.

Shouldnt they just write a book? Then they could be millionaires . . . Just like you!

Oh my goodness, that was just beautiful.

As someone that covers sports business, let me say that Bernie is woefully off here on why the difference. As sad a commentary as this is, baseball is entertainment. It’s why there are multi-billion TV deals and 70M+ attend games in person. I thought Bernie understood economics.

Where’d you get the impression that Bernie understood economics, Maury?

There are 750 Major League Baseball players. In the world. 70 million fans voluntarily paid to watch MLB players perform in 2018. This is an apples and asteroids argument.

Meanwhile, literally every single U.S. citizen either pays school taxes or pays rent to someone who does, but let’s not tug at that thread too hard.

I think teachers should be paid more, but you do understand players are only paid well because people are paying to go see them… right? I’m not gonna drop $80 to go see a 3rd grade teacher for 3hrs.

Fair point. What if they sold $10 beers at soccer games, though?

As a resident of New York, the cradle of public education in America, I am not allowed to express such a criminal thought as Mr. Thompson’s in public. Kudos to him.

Because pro sports teams in private leagues can pay their athletes millions, that means taxpayers can pay teachers more?

What are you talking about?

I was surprised to see you polling so badly this time around, but now I get it. You seem like a nice man but you speak gibberish.

Gibberish would actually be preferable to this kind of idiocy, I’d say.