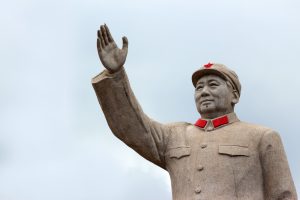 By way of introduction, I’ll allow the irony of a dude who became a socialist as a privileged member of the upper-class of the wealthiest nation on Earth (and made himself a millionaire off of book sales) speak for itself.

Instead, let’s move right along to Sen. Bernie Sanders’ latest “oopsie” in which he attempts to praise the totalitarian Communist dictatorship of the so-called “People’s Republic” of China (until China stops treating its people like dogs, the People’s Republic bit gets my sarcasm quotes) and, once more, inadvertently praises capitalism.

“China is a country that is moving unfortunately in a more authoritarian way in a number of directions,” Sanders told Hill.TV’s Krystal Ball in a Tuesday interview. “But what we have to say about China in fairness to China and it’s leadership is if I’m not mistaken they have made more progress in addressing extreme poverty than any country in the history of civilization, so they’ve done a lot of things for their people.”

What Sanders seems to have missed, according to Forbes, is that capitalistic free-market principles are to thank for millions of Chinese people finally seeing their way out of the depths of poverty:

…never before in history have so many people escaped poverty in such a short time as in the past decades in China. According to official World Bank figures, the percentage of extremely poor people in China in 1981 stood at 88.3%. By 2015 only 0.7% of the Chinese population was living in extreme poverty. In this period, the number of poor people in China fell from 878 million to less than ten million…

…China’s success provides clear evidence of the power of capitalism. Under Mao, the state had an omnipotent grip over China’s economy. What has happened over the past few decades can be summed up in a few sentences: China has progressively embraced the tenets of free-market economics, introduced private ownership, and gradually reduced the influence of the once all-powerful state over the Chinese economy. That the state still plays a major role today is simply because China is in the midst of a transformation process that began with complete state dominance of the economy.

I’ll hold my applause ’til the one-child policy is repealed, but that’s a great start.

Bernie Sanders tries to praise communist China, ends up accidentally praising free-market principles: “They have made more progress in addressing extreme poverty than any country in the history of civilization, so they’ve done a lot of things for their people” pic.twitter.com/FqNQkOKBwG

While it’s all well and good that China is starting to loosen its death grip on its people and roll out a few free-market principles, Sanders’ idea that the Chinese government has “done a lot of things for their people” doesn’t hold water.

“He did not address how China’s communist government has oppressed religious people and minorities, putting at least one million Uighur Muslims in concentration camps while instituting one of the most comprehensive surveillance states in history,” The Free Beacon reports. “In China, the Communist Party requires all religions to pledge ultimate loyalty to President Xi Jinping, who is atop a one-party system that does not allow political opposition.”

And, like any good socialist, Sanders also forgot to mention that one time Mao Zedong oh, you know, carried out the largest mass murder in world history against his own damn people.

“According to the authoritative ‘Black Book of Communism,’ an estimated 65 million Chinese died as a result of Mao’s repeated, merciless attempts to create a new ‘socialist’ China,” The Heritage Foundation reported. “Anyone who got in his way was done away with — by execution, imprisonment or forced famine.”

It’s hard to believe that Sanders, who would readily drag out of the grave America’s past national sins, is ignorant of the blood on China’s hands, that of its own people. No, instead, he’s like any other slimy socialist—eager to covet wealth, not quite so eager to be honest about the cost of redistributing that wealth by force.

Sorry, folks, but murderous Communist dictatorships get me a little feisty.