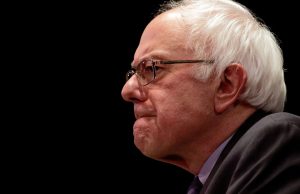 Has anyone ever said something so mind-bogglingly nonsensical to you that you felt the need to look around to see if you were being filmed?

While it would be great if, just ahead of the Democratic primaries, Ashton Kutcher burst into the scene and let the blue-voters of America know they’d been punked. Or, for you older folks, told to “smile” because this was all just one elaborate Candid Camera gag.

Sadly, this is reality. It’s farcical, but it’s no farce. These are really the “best shot” the Democratic party can hit President Trump with in 2020.

Of course, as a conservative, this isn’t really bad news. In fact, the destruction of the Democratic party by radical socialism, woke identity politics, and infighting between proponents of such and the more moderate “old guard” is—dare I say—enjoyable to watch.

Few 2020 candidates have caused me to spit out my coffee from laughing so hard as Comrade Bernie Sanders.

Now that there are no pesky Clintons around to rig the primaries, the dude is really letting loose and taking advantage of his position as a consistent top-tier candidate by saying increasingly wacky and uninformed nonsense.

The latest? Sanders stated that many Americans would “be delighted” to pay the higher taxes his presidency would undoubtedly lead to, as long as they got some of that primo government-run healthcare out of it.

“Yeah, but I suspect that a lot of people in the country would be delighted to pay more in taxes if they had comprehensive health care as a human right,” Sanders answered. “I live 50 miles away from the Canadian border. You go to the doctor any time you want. You don’t take out your wallet. You have heart surgery, you have a heart transplant and you come out of the hospital and it costs you nothing.”

Which Canada does this dude live near? The one where, according to The Toronto Sun, “excessive wait times for medically necessary treatment have become a permanent feature of Canada’s health care system”? Did he seriously just suggest that Canadians can just walk into a doctor’s office and come out with a fresh, new ticker and a side of poutine?

“Your kids in many countries around the world can go to the public colleges and universities tuition-free, wages in many cases are higher,” Sanders continued, once again demonstrating his ignorance of basic economics.

“So there is a tradeoff, but at the end of the day, I think, that most people will believe they will be better off when their kids have educational opportunities without out of pocket expenses and when they have health care as a human right and they have affordable housing, when they have decent retirement security, I think most Americans will understand that is a good deal,” Sanders concluded.

Listen, I don’t know what sort of mythical unicorn of an American is prancing around just wondering what to do with all the excess income our quasi-capitalistic system has allowed them to earn, but if y’all really want to give more money to the government, who has such a solid track record when it comes to resource management, they take donations any time.