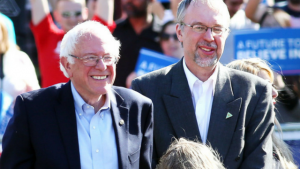 Bernie Sanders’ son, Levi Sanders, is pretty much just like his old dad–except being a vegetarian. So basically, he’s an even bigger hippie than Bernie.

The younger Sanders, according to The Blaze, is following in his father’s footsteps by running for Congress in New Hampshire, using essentially the same platform as his dear old dad–free health care, higher minimum wage, free college, free everything, etc.

But, as is understandable for the progeny of a man who had the 2016 Democratic nomination robbed from him by the most corrupt and unlikable politician in US history, Hillary Clinton, Levi has a bone to pick with the Democratic establishment.

He’s also got some stunningly honest insight into why Trump relates to Americans–and the Democrats absolutely don’t.

Speaking to The Independent recently, Levi Sanders reflected on Clinton’s “deplorables” remarks from the 2016 campaign trail, and what that says about the state of their shared party (Levi is running as a Democrat).

“When Hillary Clinton used the word ‘deplorable,’ that had a significant effect on so many people,” he explained. “They basically said ‘We understand that Donald Trump is not a nice guy, but he is one of us.’ He said ‘Yes, I know I’m a billionaire, but I’m like your weird uncle. I’m not politically correct and I’m not judging you,’ and that’s the key.”

Despite calling the Trump presidency a “disaster”, he gives the Trump administration high marks for relating to the average American.

“Trump has done an incredible job in saying, ‘Listen, you don’t really need to make more money. I’m not going to raise your minimum wage but I’m going to make you feel good about yourself – the Democratic Party has taken away your self-esteem and your self-worth,’” he explained. “If you take someone’s self-esteem away you are done, but you can take away someone’s money.”