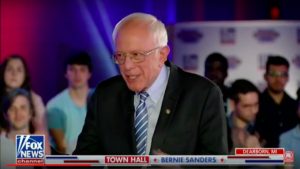 Sen. Bernie Sanders participated in a Fox News town hall Monday evening where he was asked if he regretted praising former Cuban dictator Fidel Castro. His answer, unsurprisingly, was a big, fat “no.”

The question was asked by Fox News anchor Bret Baier who wanted to know whether or not Sanders regretted making positive comments on Castro’s “literacy program” during an interview with 60 Minutes since it seems those statements have started to hurt his presidential campaign.

Here’s more from The Free Beacon:

Sanders, who has fallen behind former vice president Joe Biden in the race for the Democratic presidential nomination, attempted to blame the media for the backlash he received for praising Castro.

“I know it’s hard given ‘gotcha’ questions,” Sanders said. “Given the media that we deal with and everything else, you say something and people can beat up on you. I think you’ve got to tell the truth. So, if in China they’ve reduced extreme poverty, does that make me a communist who supports China? No, I’m just telling you a simple fact.”

Baier then brought up the criticism Democrats like Rep. Stephanie Murphy has been stating over the controversial comments, prompting Sanders to reply with a curt, “Of course they did.”

He went on to say, “So what? I’ve got a lot of Democrats who are attacking me as well. You know that. Nothing new there.”

Murphy’s criticism was that Sanders’ comments were “ill-informed” and “insulting to thousands of Floridians.”

“Whether the subject is Cuba, Venezuela, Nicaragua, Israel or other foreign policy challenges, [Sanders] has consistently taken positions that are wrong on the merits and will alienate many Florida voters now and in the general election if he is nominated,” Murphy stated.

Seems pretty clear that Sanders’ statements didn’t sit well with folks on either side of the political spectrum and could possibly cost him this current election. Don’t think anyone around these parts would be too disappointed by that though.