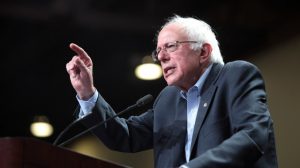 So the second night of the Democratic presidential debates was quite a farce, as was expected, with many of the more radical individuals in the party taking the stage and spouting a bunch of wacky nonsense that baffled the minds of anyone who wasn’t three shades of crazy.

One of the more wacky ideas to be presented during the debate, unsurprisingly, came from Sen. Bernie Sanders, everyone’s second favorite Democratic socialist behind Rep. Alexandria Ocasio-Cortez.

So what was the pure craziness that Sanders blabbed about? Rotating SCOTUS justices on and off the Supreme Court.

“I do not believe in packing the court,” Sanders said. “We’ve got a terrible 5-4 majority conservative court right now. But I do believe constitutionally we have the power to rotate judges to other courts and that brings in new blood into the Supreme Court and a majority I hope that will understand that a woman has a right to control her own body and that corporations cannot run the United States of America.”

Of course, the question posed to Sanders was about what he would do as president if a conservative-leaning Supreme Court struck down the landmark abortion ruling Roe V. Wade, but never mind that.

Now, we’ve read the Constitution, and we can’t find a word about being able to rotate the players like they do in a volleyball game. The Constitution does say that Supreme Court justices can hold their seats on the court “during good behavior,” which most have interpreted to mean for life, if they so choose.

But Ol’ Bernie thinks between the lines the founders meant to say that justices can be swapped out at anytime — and he’s made the claim before. “What may make sense is, if not term limits, then rotating judges to the appeals court as well,” Sanders said in April. “Letting them get out of the Supreme Court and bringing in new blood.”

How did folks react to this insanity? See for yourself…

?? @BernieSanders wants to rotate SCOTUS justices to other courts? I’m missing something.

Perhaps this is the first sign of senility showing in Sanders? I mean, there has to be some sort of logical explanation for why this guy would even think something so loony as this, right? There’s no way someone exists who actually thinks this is a good idea, right?

Sanders has given plenty of good reasons in the past as to why he should never be allowed to sit in the White House, but he doesn’t seem to be satisfied with the length of his list, thus he keeps adding to it.

It’s time to give it up, Bernie. Go home, watch “Murder, She Wrote,” and take a nap.