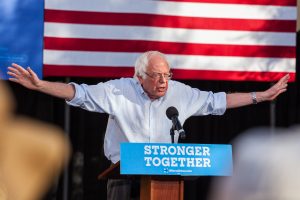 In the mad dash to secure the 2020 Democratic presidential nomination, Sen. Bernie Sanders seemed to finally be hitting his stride.

That is, of course, until another wrinkly old white dude came on the scene and started snatching up all that establishment Dem support, along with the fact that the ultra-leftists are just plain sick of having male presidents (so much gender assumption, guys).

Add to that the fact that Sanders seems a little shifty and demonstrates brazen ignorance of even the most basic economic principles, and it’s no wonder why the dude is falling behind in the polls.

As one last desperate attempt to maintain relevance and prominence in the 2020 race, Comrade Sanders tried a radical new strategy: actually being honest about the effects his mega-socialist policies will have on America, for once.

Back in the 2016 presidential race, Sanders won the support of New Hampshire voters without breaking a sweat. Now, the dude has to resort to being a little more truthful (gasp) with folks if he’s going to win their support over Uncle Handsy and Lie-awatha.

The trouble is, the truth he’s finally telling his potential supporters in campaign speeches, well, it’s not a very comfortable one.

At a rally in NH, Sanders admitted to supporters that taxes would need to be raised on everybody, not just the 1% as anti-wealth socialists so often say, in order to pay for his pet “Medicare-for-all” plan.

According to Fox News, Sanders’ plan for universal healthcare would jack up payroll taxes on the middle class alongside an increase in federal income taxes on “high-income earners”. Some economists predict the plan could cost as much as $32 trillion, a figure built on the charitable assumption that there would be no steep cuts to service, which their damn sure would be.

Sanders admitted that “ordinary people” would face increased taxes, but that the benefits of universal healthcare would outweigh the loss of income.

“It would cost you and ordinary Americans a lot less than you are currently spending on average,” he told the crowd in New Hampshire. “What it will probably end up looking like is a payroll tax on employers, an increase in income tax in a progressive way for ordinary people—with a significant deductible for low-income people who pay nothing for it.”

Though the Sanders campaign remains pretty tight-lipped about the gritty details of the healthcare plan, the Committee for a Responsible Federal Budget projects that it would cost at least $27 trillion and that, even with an expansive tax increase, Sanders’ can only anticipate covering about one third to one half the cost of the program.

Even if Sanders is able to locate that magical socialist money tree and raise $10 trillion without “economic consequence”, the remaining $17 trillion would have to be funded by further tax increases, major cuts in service or a combination of the two, not to mention the fact that out-of-pocket medical costs would more than likely stay the same.

Oh, Bernie. I believe that’s what the kids these days call a “self-own.” Your socialist policies just aren’t going to work. Take your ball and go home.