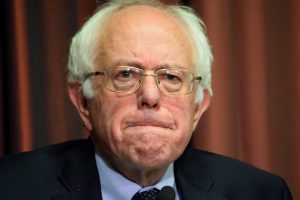 Comrade Bernie Sanders has long been a tireless advocate for as much socialism as can be injected into a free market: hiked up minimum wages, more power given to the union over the individual—you name it.

In his current bid for the presidency, Sanders has put his rhetoric into action and actually become the first candidate (of virtually all of them) to actually pay his hourly campaign staffers the magical $15-per-hour minimum wage.

That would be a great and noble thing if, you know, socialism actually worked.

His campaign’s union contract resulted in a flat annual salary of $36,000 for field staffers. In a normal 40-hour work week, that would pay about $17 per hour. But some staffers say they work up to 60 hours a week, meaning their pay ends up being about $13 per hour.

To combat this, Sanders’ campaign will now limit staffers’ hours to ensure they are paid at least $15 an hour.

So, rather than make a “living wage” having their hourly rates raised, Sanders’ poor minions are going to be making the same amount they did before. He’s just done some creative math to satisfy the minimum wage demands without actually paying them more.

Cue the sad violin for the Comrade’s staffers who will surely be dining on Top Ramen and bicycling to work for the foreseeable future.

“We look forward to continuing those discussions and obviously are disappointed that some individuals decided to damage the integrity of these efforts before they were concluded,” Sanders’ campaign manager Faiz Shakir said in a statement to Newsweek. “As these discussions continue, we are limiting hours so no employee is receiving less than $15 for any hours worked.”

Shakir added in his statement to Newsweek that the Sanders campaign had offered to give field organizers a raise to about $42,000 annually, but the offer was rejected because that salary package would have required a six-day work week and would have forced them “to pay more of their own health care costs.”

Well, having your hours cut does free you up significantly for all the standing in bread lines you’ll have in your future, so there’s that.

As this microcosmic Animal Farm continued to play out, some disgruntled staffers went to the media with their grievances. Of course, once word got back to Sanders, he was none too happy.

“I’m very proud to be the first presidential candidate to recognize a union and negotiate a union contract,” Sanders told the Des Moines Register in response to a Washington Post piece about the union drama. “And that contract was ratified by the employees of the campaign, and it not only provides pay of at least $15 an hour, it also provides, I think, the best health care benefits that any employer can provide for our field organizers.”

“It does bother me that people are going outside of the process and going to the media,” he added. “That is really not acceptable. It is really not what labor negotiations are about, and it’s improper.”

Well, buddy, we have this thing called the freedom of the press.  It’s one of the most important social protections Americans have because, when negotiations come to a standstill behind doors, workers always have the right to take their story to the press.

And, if his past responses are any indication, a free press (insofar as it has the boldness to speak up against him, his administration, or his policies) will be among the first things to go under a Sanders presidency:

What Sanders is experiencing is exactly what he wants to foist onto millions of Americans and their employers. His staffers were salaried, but hourly workers will also see their hours cut in order to ensure they’re paid $15 per hour. As for negotiations, those demanding better working conditions routinely go to the press. They also sometimes hold strikes that are guaranteed to get media coverage. For Sanders to complain about how things are going in his campaign shows he hasn’t truly thought through the consequences of his policies.

Are any bells going off in these staffers’ brains? It’s not too late to jump the socialist ship, y’all. Step into the light.