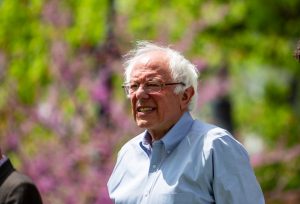 As the 2020 Democrat race lumbers ever closer to the primaries and the flatlining hangers-on refuse to quit hangin’ on, the herd is going to need to be rather aggressively thinned.

Sure, there are over a dozen names we don’t know who probably won’t do an ounce of campaigning in our states (if you’re a red state or “flyover country,” anyway), but even the headliners of that crapshow are starting to feel the heat.

After doing the whole white knight thing and valiantly divulging a fat stack of tax docs, Bernie is experiencing what I can safely assume is the exact opposite reaction he was expecting.

Long story short, people aren’t too impressed by the Doc Brown-lookin’ personification of the failures of socialism who uses one side of his mouth to preach the evils of capitalism and earning a profit and the other to say, “If you write a best-selling book, you can be a millionaire, too.”

After an article from Politico did a little bit of deeper digging into Sanders’ finances last week (woohoo! the media is finally bothering a liberal, for once!), the Vermont senator has a bit of a surprising complaint.

“Call that what it is. It’s an anti-semitic article,” Sanders said in an interview with The Young Turks host Cenk Uygur.

The article, titled The Secret of Bernie’s Millions, is basically the bigger-budget version of every blog (like us) who pointed out the incredible hypocrisy of Bernie’s attainment of some pretty serious wealth (as well as a few swanky houses, a healthy investment portfolio, and a comfortable retirement above what he’ll get from Uncle Sam) while “unrelentingly” railing on the 1%.

Well, this is embarrassing.

I had no idea the dude was even Jewish. And, as a news writer, the dude’s ethnicity and religion rank at roughly 0% on my handy-dandy Relevant To The Issue At Hand Scale™.

Seriously, that’s how little ethnicity matters to most of us who still find the energy to dust off our thinking caps once in a while so we can examine issues like this critically.

But, for the folks who insist on using “justice” to deflect any attack or criticism, however apt, are happy to play that card.

Take, for example, the snazzy Photoshop job Politico did for the article’s featured image: 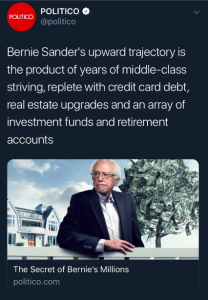 I may be young and naive, but I don’t get what’s anti-Semitic about any of this. Is it too subtle? Is this what the hip kids these days call “dog whistling”? It’s like an optical illusion, and I’m not seeing the picture.

Of course, our trusty Alexandria Ocasio-Cortez saw the issue—albeit in an older version of Politico’s tweet that was updated to add context.

Can ⁦@politico⁩ explain to us how photoshopping money trees next to the only Jewish candidate for president and talking about how “cheap” and rich he is *isn’t* antisemitic?

Or are they just letting this happen because he’s a progressive politician they don’t like? pic.twitter.com/O9qvDBw4ib

Thankfully, we can always count on AOC’s hawkeyes for microaggressions. Meanwhile, I’m over here feeling like Mr. Magoo because—shame on me—I thought the issue was the dude’s stunning hypocrisy, not his ethnicity.