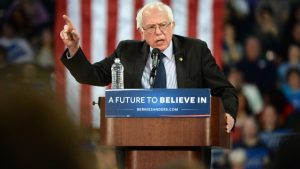 When you think of supporters of local law enforcement, the last person that crosses your mind is probably socialist Sen. Bernie Sanders. Yet, in the upside down world that serves as our reality in 2020, Sanders himself, the man who once called for a “political revolution,” has come out and stated that he is not in favor of abolishing the police.

The suggestion of abolishing law enforcement departments has caught some serious traction due to the violent riots and protests that were inspired by the death of George Floyd at the hands of police officers.

In fact, the Minneapolis City Council in a veto-proof majority, has already voted and pledged to disband their department in order to appease concerned protesters. The Floyd incident happened in the city, so maybe it’s not that surprising they would make such a declaration. Keep in mind there’s no Republicans on the city council too.

Sanders spoke in an interview with the New Yorker about his push for police reform, which actually would have included more money given to law enforcement departments, which definitely goes against the current narrative from the “Black Lives Matter” movement.

Sanders insisted Congress should adopt “police-department reform on top of over-all criminal-justice reform,” which he said he proposed in a letter to Senate Minority Leader Chuck Schumer.

It’s really hard to wrap the mind around the fact that Sanders isn’t all in on the current calls for revolution and isn’t a fan of getting rid of cops. One has to wonder how this is going to impact his supporters, who are largely young and socialists, the very same folks protesting and burning the country to the ground, and are the ones making the call for abolishing the police?