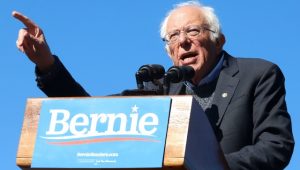 Well, it looks like everyone’s least favorite Democratic socialist, Sen. Bernie Sanders, has finally got it through his head that he has zero chance of winning the nomination and suspended his presidential campaign, which means that former Vice President Joe Biden is now the Democratic Party presumptive nominee.

Sanders suffered numerous losses in the primary and apparently could no longer see a viable path to victory and did what folks have been calling for him to do for a long time now.

The Vermont senator made the announcement to his staff during a call on Wednesday after the results came in from Tuesday’s Wisconsin presidential primary.

After the first three primary contests, Sanders was dominant in the race. He was a close second to former South Bend, Indiana, Mayor Pete Buttigieg in Iowa and won New Hampshire and Nevada. But, after Biden won South Carolina in a blowout, Buttigieg and Minnesota Sen. Amy Klobuchar quickly dropped out of the race and endorsed Biden, coalescing more centrist opposition to Sanders’s socialist vision and allowing Biden to amass a delegate lead that Sanders could not break.

Sanders campaigned for the Democratic nomination for the second time on a socialist platform and popularized Medicare for All, a plan to create a government-funded healthcare system that would make virtually all private insurance plans illegal. That embrace of socialism and rejection of private insurance, along with an admission that his plan would raise taxes on middle-class households, sparked heavy criticism from more centrist primary rivals.

Sanders suspended his campaign briefly back in October after suffering from a heart attack and having two stents put in after doctors discovered blockages in his heart. The 78-year-old had been experiencing chest pains during a rally in Las Vegas.

Look, this was inevitable. We all saw that the Democratic Party hated Bernie and wanted nothing to do with him. This was the same treatment he received during the 2016 presidential race.

A lot of this has to do with his super extreme positions on important issues, going very far to the left. The guy praised Castro for goodness sake. That’s an automatic dealbreaker for most Americans, both Democrat and Republican.

Now we’re going to have some killer debates between Biden and Trump later this year, which will be extremely entertaining.