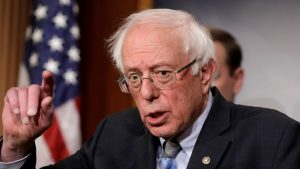 Sen. Bernie Sanders, a raging socialist, criticized fellow Democratic leaders after they threw their support behind a $908 billion coronavirus relief package after turning down an offer from President Donald Trump for a $1.8 trillion back in October.

Along with that, Sanders admitted that the Democrats in Congress purposefully held up negotiations for the deal. What this means is that Sanders and other leftist ilk played politics with the suffering for the citizens of our great country, all because they had an axe to grind against the president.

CNN host Jake Tapper asked the senator whether it was a mistake for Democrats to walk away from the White House’s $1.8 trillion bill, which likely would have included $1,200 direct payments to all Americans, when House Speaker Nancy Pelosi was proposing a $2.2 trillion bill at the time.

“What we need is a compromise. I know I can’t get everything that I want. But this bill really is not a compromise,” Sanders said of a $908 billion stimulus package that a bipartisan group of senators introduced last week. “It gives the Republicans almost everything that they wanted.”

This is truly disgusting. Sanders and Speaker Nancy Pelosi have been using the suffering of small business owners and individuals who have lost their ability to provide for themselves due to lockdown measures suggested by these same politicians, as a tool and a weapon against the Trump administration.

Folks, all you are to them is zeroes at the end of their taxpayer funded paychecks. It should make you extremely upset to see your suffering weaponized by Democrats for their own political agenda.