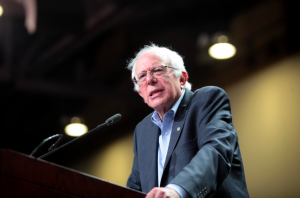 Although Bernie Sanders, the darling of the neo-socialist movement, is surging ahead of his fellow Democrat 2020 hopefuls, there’s one area where they’ve got him beat: release of tax returns.

Several of Sanders’ competitors in the race to the Dem primaries have ever-so-generously gifted the public with their recent and past tax returns, including Elizabeth Warren, Kirsten Gillibrand, Amy Klobuchar, and Jay Inslee.

Bernie, however, is a little more slippery when it comes to exactly when he plans to release the tax returns he and his wife self-prepare.

According to CNN, Sanders said on CBS’ Face the Nation that his campaign would publish his returns after giving them a once-over: “Yeah, we will. I mean, we have it all done and it’s just a question of dotting the i’s and crossing the t’s.”

While some reports state Sanders clearly referred to a Tax Day revelation of his returns, others say he was not so specific and cut off questioning when reporters pressed for a date.

It’s hard to say exactly what the point of revealing any amount of one’s past tax returns (with a decade or so seeming to be the gold standard amongst Dems seeking to earn the most gold stars) especially before any of these folks have even won their party’s nomination.

Oh, wait, I forgot. This year’s theme for the Democratic Party’s shot at the presidency is “Orange Man Bad,” so they’re literally doing as much as they can to differ President Trump in any way possible, including reserve their perfectly legal right to financial privacy.

In fact, it was the suggestion that Sanders’ long-time resistance against releasing stacks of his family’s tax returns was uncomfortably reminiscent of Trump’s tight lid on his tax info that prompted the Vermont senator to finally make a plan to publish his taxes.

Told that he was being compared to President Trump, who has refused to release his tax returns, Mr. Sanders got more specific: “On the day in the very immediate future, certainly before April 15, we release ours, I hope that Donald Trump will do exactly the same. We are going to release 10 years of our tax returns, and we hope that on that day Donald Trump will do the same.”

Bernie responded to the grave insult of being compared to his own president by minimizing his wealth and saying anything divulged in his taxes would be “boring”.

“Not being a billionaire, not having investments in Saudi Arabia, wherever he has investments, all over the world, mine will be a little bit more boring,” he retorted.

However, one shining star of a reporter took the opportunity to remind him of the fact that, though the vast bulk of his campaign rhetoric has always focused on the wickedness and greed of the world’s millionaires and billionaires, Sanders is a millionaire himself.

If it wasn’t enough to compare Sanders to the big, bad President Trump, calling the ardent socialist out on being a millionaire is surely fightin’ words, and Bernie’s response is absolutely golden:

Oh, Bernie. Don’t you know that’s capitalism in a nutshell? That’s right, if you create a product or offer a service that many people want, it will sell like those proverbial hotcakes and you can be a millionaire, too.

Sanders’ zany, self-unaware comment echoes a similar statement made in the past by another magnificently wealthy social justice warrior: Michael Moore.

Yeah, guys, you’re right. And millions of people like what Jeff Bezos offers. Mark Zuckerberg, too. Heck, that Steve Jobs guy was a little kooky, but boy did he sure make some great phones.

It just goes to show you how hilariously out of touch even the eldest, sagest of socialists are when it comes to the fact that free-market capitalism, not socialism and the forced redistribution of wealth, is truly the best system to foster wealth, prosperity, and the instinctive drive to be successful.