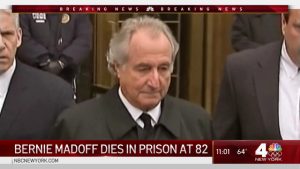 The infamous Ponzi schemer Bernie Madoff, who was convicted and sentenced to 150 years in federal prison for perpetrating the largest Ponzi scheme in history, has passed away in prison as the age of 82.

Madoff died at the Federal Medical Center located in Butner, North Carolina. He suffered from chronic kidney failure and other ailments, but died of natural causes according to an anonymous source for the Associated Press.

He was imprisoned back in June of 2009 after creating a fraud that is estimated to be as high as $64.8 billion.

Last year, Madoff’s lawyers filed court papers to try to get him released from prison in the COVID-19 pandemic, saying he had suffered from end-stage renal disease and other chronic medical conditions. The request was denied.

Madoff admitted swindling thousands of clients out of billions of dollars in investments over decades.

Among those he betrayed were the actors Kevin Bacon, Kyra Sedgwick and John Malkovich; baseball Hall of Fame pitcher Sandy Koufax; and a charity associated with director Steven Spielberg.

Owners of the New York Mets, longtime Madoff clients, struggled for years to field a good baseball team because of losses they suffered.

Do you think this guy is really going to be missed by anyone? Probably not. It’s sad to say that, but hey, it’s the truth. This is what happens when you allow yourself to be consumed by greed.

What’s really tragic is this man spent the last part of his life rotting away in a federal prison. That’s a waste. A total waste of a precious gift.