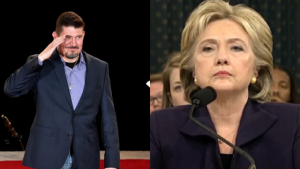 Hillary Clinton has a way of speaking as if the entire nation suffers from collective amnesia.

I think one of the things that makes her such an effective liar is what an incredible job she does acting as if she’s never done a thing wrong in her life. That’s like, sociopath status.

So when she took to Twitter to complain about the White House hesitating to “defend a diplomat”, she may even have convinced herself she does not still have blood on her hands for the deaths that resulted from the Benghazi terrorist attack during her time as Secretary of State.

But not only does America remember, the heroes who witnessed first-hand how Clinton literally left a diplomat to die remember.

Former Secretary of State Hillary Clinton on Thursday night received a pointed tongue lashing from Benghazi warrior Kris Paronto after she audaciously scolded the White House for not defending a U.S. diplomat to her liking.

Paronto is a former Special Forces officer, a surviving member of a six-man security team who claims he was given a “stand down” order from a top CIA officer following distress calls from the State Department concerning a terrorist attack on the U.S. compound in Benghazi, Libya, as noted by POLITICO. Four Americans, including U.S. Ambassador Christopher Stevens, were murdered during attack; Hillary Clinton was serving as Secretary of State at the time.

Hillary was reacting to White House Press Secretary Sarah Huckabee Sanders’ remarks regarding the president and former U.S. Ambassador Michael McFaul. “McFaul has been listed by the Russian government as a person of interest in the Bill Browder/Russia financial scam, and President Trump allegedly told President Putin on Monday that the U.S. would consider sending McFaul and Browder to Moscow for ‘questioning,'” reports Real Clear Politics.

“Ambassador @McFaul is a patriot who has spent his career standing up for America. To see the White House even hesitate to defend a diplomat is deeply troubling,” Hillary wrote.

Ambassador @McFaul is a patriot who has spent his career standing up for America. To see the White House even hesitate to defend a diplomat is deeply troubling. https://t.co/gI8K8Tjg3M

Enter Paronto, who blasted back:

“Are you f’n kidding me [Hillary Clinton]?!!!” wrote Paronto via Twitter. “You left Ambassador Stevens and us to die in Benghazi then spewed lie after lie to the family members of my dead teammates and to the world to cover it up and now you have the nerve to talk about defending diplomats?! You are disgusting!”

You can’t hide from the past, Hillary, no matter how good you are at lying about it.