Ben Carson Speaks Out Against Vaccine Mandates, Say They Might Shape A Terrible Future For The Country 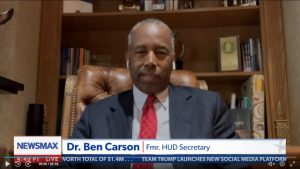 Former Housing and Urban Development Secretary Ben Carson, who also is a retired neurosurgeon of legendary status, spoke out against the idea of mandating vaccines here in the United States, saying that doing so might shape a terrible future for our country.

“The really important thing here is for us to recognize that this is America that we’re living in,” Carson went on to say during an interview on Monday’s “Eric Bolling: The Balance.”

“This is a place where people came so that they could be free. And the whole concept of mandates, no matter how wonderful you think they are, are opening the door to something that could be pretty terrible in the future,” he went on to add.

Carson shared his concern that politicians could impose “some types of penalties” on Americans for having unorthodox views, and that is something “we have to think about.”

As far as vaccines, Carson believes “they’re very good.” Vaccination mandates, however, are not, he said.

And if activists try to steer people ”in one direction or another by parceling out certain types of information, it makes them even more suspicious,” Carson said.

Carson then finished up his interview by saying that “the damage that we do with mandates that are unnecessary is tremendous. And we can’t afford it.”

Okay, so let’s think about vaccine mandates for a moment. Do we really want the same kind of folks who run the DMV to be in charge of giving us vaccinations and calling the shots about our personal health?

Do we really want the federal government, the same folks who thought up the IRS, to be the people who tell us what we can and cannot put in our bodies?

I mean, I know the answer, and you probably do too. It’s the left that doesn’t seem to get it.