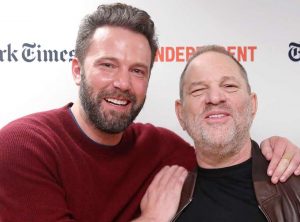 After Gwyneth Paltrow and Angelina Jolie came out with allegations of sexual harassment against movie mogul Harvey Weinstein earlier today, actor Ben Affleck issued a statement of his own via Facebook. 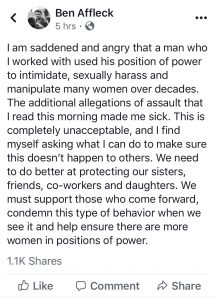 As Fox News says: Paltrow told the New York Times Weinstein invited her to his suite at the Peninsula Beverly Hills hotel after casting her in the lead role for “Emma” and suggested they go to the bedroom for massages.

“I was a kid, I was signed up, I was petrified,” Paltrow told the Times. Then 22, she confided in her boyfriend Brad Pitt what had happened, and Pitt later confronted Weinstein.

According to Paltrow, Weinstein threatened her to keep her quiet.

Thankfully guys like Affleck, who allegedly had an affair with his nanny and (then married) Lindsay Shookus while married to the mother of his children, Jennifer Garner, are standing up for the women in Hollywood.