Dr Seuss and a Bedtime Story for America 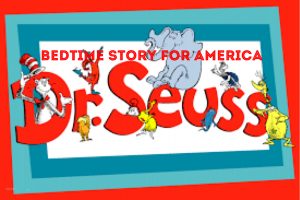 In in case you missed it, check out the Dr Seuss Bedtime Story for America from the Political Cowboy Facebook page. The video garnered one million views in its first 4 hours and continues to grow.

The text below is the poem that’s written by Roy Jeffords and myself in the style of that now supposedly racist Dr Seuss. See the video at the bottom and follow Political Cowboy on Facebook. Enjoy!

You did it up right.

Elected a wild man, oh what a sight!

The left was agog, all lost in a fog.

They stumbled about, scratching their nogs.

How did this happen? What could it mean?

They thought and they wondered

Until finally they screamed.

We can’t let it stand.

In order to stop it, together we’ll band.

We’ll tear down the statues,

Erase all the past. Rewrite our history,

The way it should be. The Trumpster won’t stop us.

They came right around.

We must tear it down.”

They picked up their bats,

Tear gas, and mace. Aimed it and

Sprayed it in every white face.

They started a riot.

The press jumped right on it.

They pinned it on Trump;

No blame did they take.

Oh, certainly not they, who never could hate.

the left had a plan.

Mother Nature would help. Yes, they had their man!

With stories of doom, they’d skin off his hide,

But America rose up, bursting with pride.

Standing together, we worked hand-in-hand,

And each one was helped, every child, woman, and man.

He felt put upon. He needed much more.

When his BLM girlfriend gave him a push,

He said cops were racist, all in a rush.

To combat oppression, he cackled with glee,

For the Star-Spangled Banner, I’ll take a knee.

The players all joined him,

And coaches and staff.

It seemed such a lark, but nobody laughed.

The fans burned their jerseys, their tickets and stuff.

Turned off their TV’s, and became awfully gruff.

The left called them racists, accused them of hate.

But when money dried up, the players said, “Wait!”

“Free speech is at stake!”

The leftists did cry.

But for speaking on campus, those rules don’t apply.

The right stands for hate, their words all ring hollow.

When they show up at school, destruction will follow.

Ben was all wrong. So were Milo and Condi.

As for Brennan and Wong, they weren’t welcomed fondly.

Has covered it all. Hoping in vain

Their enemies would fall.

When the narrative fails, it’s never a strain.

They make it all up, and speak it real plain.

The truth doesn’t matter, only the plan.

No one thinks for himself. No, not even one man.

Or shouts out the facts, they call it fake news

and question his acts. Nothing is sacred,

No belief is too holy, to leave it alone

And report the truth only.

Pervert it they must, killing all trust,

But America is strong.

These truths we hold dear.

Our Creator bestowed us with rights that are clear.

We’re each of us equal, and free to pursue

Life and liberty, yes those, and happiness, too.

I love y’all, God bless, and here’s a Facebook poke.