Barrett Pressed By Dems On Hot-Button Issues, Cites ‘Ginsburg Rule’ Of ‘No Hints, No Previews,’ 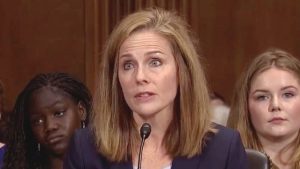 Supreme Court justice nominee Judge Amy Coney Barrett cited the “Ginsburg Rule” during the second day of her confirmation hearing when being pressed on hot-button issues by Democrats on the Senate Judiciary Committee, which states “no hints, no previews.”

As you can imagine, quoting the rule of the very justice she would be replacing, a diehard favorite of the radical left, likely made them all grit their teeth in frustration.

In one exchange, Barrett invoked the “Ginsburg Rule” when Senate Judiciary Committee ranking member Dianne Feinstein, D-Calif., asked during Barrett’s confirmation hearing if she agrees with the late Justice Antonin Scalia’s view that the Constitution does not guarantee a right to gay marriage.

“I’m not going to express a view on whether I agree or disagree with Justice Scalia for the same reasons that I’ve been giving,” Barrett said. “Justice Ginsburg with her characteristic pithiness used this to describe how a nominee should comport herself at a hearing: no hints, no previews, no forecasts. That has been the practice of nominees before her, but everybody calls it the ‘Ginsburg Rule’ because she stated it so concisely and it’s been the practice of every nominee since.”

“I don’t think that anybody should assume that just because Justice Scalia decided a decision a certain way that I would too,” she said.

During another point in the hearing, Barrett again referenced Ginsburg when Feinstein asked her if she agreed with Scalia’s view about Roe v. Wade being decided incorrectly.

“Senator, I completely understand why you are asking the question, but again, I can’t pre-commit or say, ‘Yes, I’m going in with some agenda,’ because I’m not,” the judge said.

Feinstein asked Barrett about her personal views on abortion and the Roe v. Wade decision, trying to figure out exactly where the judge stands on the issue.

“I do want to be forthright and answer every question so far as I can,” Barrett stated, citing the confirmation hearing of Justice Elena Kagan. “She said that she was not going to grade precedent or give it a thumbs up or thumbs down.”

“It would actually be wrong and in violation of the cannons for me to do that as a sitting judge,” Barrett said.

“On something that is really a major cause with major effect on half of the population of this country, it’s distressing not to get a straight answer,” Feinstein replied.

The more Feinstein pressed, the more Barrett refused to give answers that commit to a specific outcome of a case.

This gal knows how to handle these folks. It’s not her first rodeo. It’s refreshing to see someone simply want to stick to the Constitution. ACB is a great choice for the bench.