Barrett Asked To Hold Up Notes She’s Using To Answer Questions. The Notes Are Blank. 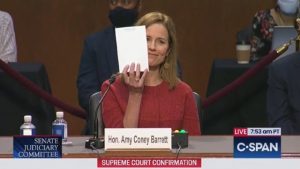 On the second day of her confirmation hearing for the Supreme Court, Judge Amy Coney Barrett was asked by Sen. John Conyn (R-TX) to show the public the notes she’s using in order to answer the tough questions she’s being asked during the proceedings.

Barrett held up a blank notepad. There’s nothing on it. Not a single thing. Other than the letter head.

“Most of us have multiple notebooks and notes and books, things like that in front of us,” said Sen. Cornyn (video below). “Can you hold up what you’ve been referring to in answering our questions?”

Barrett held up a blank notepad.

“Is there anything on it?” asked Cornyn.

“The letterhead that says United States Senate,” the judge replied.

“Is there anything on your notes?”

“The letterhead that says U.S. Senate.”

When asked to hold up what she's been using to help answer questions, Judge Amy Coney Barrett holds up a blank notepad.

This just goes to show you how well prepared ACB really is for the jog of sitting on the Supreme Court. She’s knowledgeable, extremely sharp, well balanced, and morally upright.

Radical leftists have no real reason to oppose her nomination to the bench. They are desperate to find something, anything, they might be able to use against her. But it doesn’t exist. She’s going to make a fine addition to the Supreme Court.