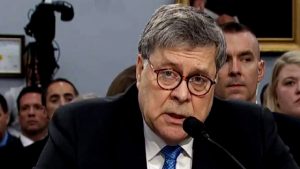 Attorney General Bill Barr stated he’s rejected the notion of appointing special counsel for an investigation into voter fraud, along with looking into the business dealings of Joe Biden’s son, Hunter, stating that he didn’t believe the federal government should seize any of the voting machines.

This guy is proving more and more that his removal from the current position he occupies is indeed a good move. It seems he doesn’t care much about the American people, nor does he seem interested in preserving the integrity of our election system.

Barr, who appeared at a Justice Department press conference to announce charges against a Libyan intelligence officer and bomb maker whom the U.S. believes played a key role in the terrorist attack which brought down Pan Am Flight 103 over Lockerbie, Scotland, in 1988, weighed in on some of the swirling controversies which remain as he ends his tenure just before Christmas this week.

“I think that to the extent that there is an investigation, I think that it is being handled responsibly and professionally currently within the department, and to this point, I have not seen a reason to appoint a special counsel, and I have no plan to do so before I leave,” Barr said when asked about whether a special counsel should be named to look into the younger Biden, who is being investigated for his taxes and finances, likely, for his foreign business dealings in China and elsewhere.

“Let me just say that there is fraud, unfortunately, in most elections, and we are too tolerant of it, but I was commenting on the extent to which we have looked at suggestions or allegations of systemic or broad-based fraud that would affect the outcome of the election, and I’ve already spoken to that, and I stand by that statement,” Barr said.

“If I thought a special counsel at this stage was the right tool and was appropriate, I would name one, but I haven’t, and I’m not going to,” he added.

AG Barr went on to say that he hopes that if Joe Biden is put into office, that he will allow Special Counsel John Durham to conclude his investigation into the origins and conduct of the FBI’s Crossfire Hurricane probe.

Kind of sad that this guy isn’t going to help out the president and ensure that our election system is preserved and kept safe from voter fraud.

Yeah, sure, there are instances of voter fraud in every election. But does that mean we should just accept that and not try to look into the matter and hold people accountable for their actions? That doesn’t seem right.