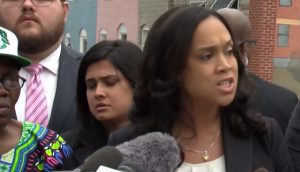 Mosby’s indictment says that she fraudulently cited a federal CARES Act provision which allowed for emergency distributions of up to $100,000 from her retirement plan “in the event of a furlough, layoff, quarantine, reduced work hours, lack of childcare, or impact on a person’s business caused by COVID.”

Prosecutors involved in the case are alleging that she used $36,000 back in May of 2020 and another $45,000 in December of 2020 as down payments on two vacation homes located in Kissimmee and Long Boat Key, Florida.

Mosby received these funds while earning a salary of close to $248,000.

Mosby is also being charged with two counts of making false statements on mortgage applications which she used to get over $900,000 in loans in order to buy both properties.

Apparently both Mosby and her hubby neglected to disclose the fact that the two of them were delinquent in federal tax payments which ultimately resulted in a $45,000 lien that was then filed against the both of them by the IRS in 2020.

Gee, that’s kind of important information. Hard to believe something like that would just slip their minds, right? Corrupt to the core.

According to a report from Conservative Brief, Mosby’s career was given a significant boost from Vice President Kamala Harris:

In a post from September 2019, Marilyn Mosby posted a picture of her with her husband and Harris at the Congressional Black Caucus dinner in Phoenix, Arizona.

“When we march and we shout about what we need to do to reform the criminal justice system we better understand that we gotta march and shout with our paychecks and all of the work that we can do to actually make sure that somebody like Marilyn Mosby gets reelected into that office, to not only get convictions, but have convictions,” Harris went on to say.

“There are a lot of people who are highly critical of her because she heard the voices of the people and said, ‘Even if I can’t win I’m going to do the right thing,’” the vice president said. “It’s going to be rough. It’s going to be tough. … She cannot fail and I know she will not fail.”

“You’re very special because you have courage. You have done something extraordinary,” Waters stated. “To be elected at a time in the history of this country when all of this turmoil is going on and to do what she did, I was just overwhelmed with her courage.”

Mosby then wished the vice president a happy birthday on social media platform Twitter back in 2017. Harris was a senator at the time.

“[Harris], thank you for being Shirley Chisholm’s wildest dream and my daughters’ aspirations!” Mosby said.

.@KamalaHarris thank you for being Shirley Chisholm's wildest dream and my daughters aspirations! #ForThePeople pic.twitter.com/cpGhqknUHM

However, Harris is not reportedly connected to any of the current charges Mosby is facing.

The prosecutor, who is backed by infamous communist billionaire George Soros, is still going forward with plans to run for re-election in June, which would be her third term if she succeeds.

Mosby has denied any wrongdoing in statements given concerning the investigation.