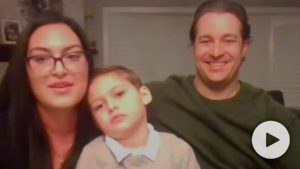 Michael DeCarlo, who is 4-years-old, recently made an appearance on “Fox & Friends” where he called an Illinois mall Santa Claus a “bad Santa” for rejecting his request for a Nerf gun for Christmas.

DeCarlo and his parents, Michael and Sabella, detailed the events that transpired at Harlem Irving Plaza in Norridge. The couple put the man who played the roll of St. Nick on full blast for his ridiculous treatment of their son and his Christmas wish.

“And I clearly reassured [Santa] that it was okay so he could have just glazed over it and moved on. I feel like he shamed my son for his choice in toys,” she continued.

The New York Post reported that “the politically correct” mall Santa told DeCarlo that he wouldn’t bring him the toy, which caused the 4-year-old to cry. The exchange was captured on video taken by his grandmother and was then posted on Facebook and went viral.

When his mother clarified that he was asking for a Nerf gun, he said, ‘Nope, not even a Nerf gun.’

“If your dad wants to get it for you that’s fine, but I can’t bring it to you,” he added. He then asked DeCarlo what else he would like. Shortly thereafter, DeCarlo started to cry.

“I was just in shock,” Sabella told the hosts of the morning program.

“I just wanted to get him out of there. It’s not like he asked for a unicorn or a puppy, he asked for a toy that they sell in every retailer even at that mall,” she said.

“I know that for some parents they don’t allow Nerf guns in their homes. It’s a personal choice and that’s fine. We respect that, but it’s a mainstream toy so I was really taken aback and not prepared at all for that kind of reaction,” Sabella stated.

The Harlem Irving Plaza posted up on Facebook that they were “distraught and deeply apologetic about the unfortunate incident at the which occurred at the Santa set on December 6, as both parties strive for families and their children to have a happy holiday experience.”

“The Santa company will continue to remind all Santa’s how important it is to not impose personal opinions during visits with the children,” the statement read.

This is just pure ridiculousness. It’s just a Nerf gun for crying out loud. Not even a BB gun! It literally doesn’t hurt anyone. It’s for fun. Have liberals totally forgotten what “fun” is? Certainly seems to be the case.

This mall Santa should be absolutely ashamed of himself for bringing in his ridiculous political beliefs.