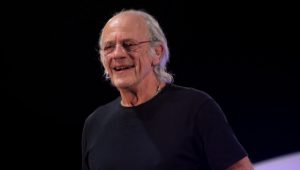 Apparently Doc Brown from the popular “Back To The Future” series is a hardcore left-wing environmentalist, or at least the actor who plays him, Christopher Lloyd, seems to be.

Lloyd is making a splash across the vast digital ocean of the Internet after stating that if they ever make another installment of the “Back To The Future” franchise, the topic of the film should be climate change.

Thank goodness the likelihood of another one of these films being made is almost zero, otherwise, a legendary franchise would be ruined by one of its own stars’ hairbrained ideas.

According to Comicbook.com, the man who turned the character Doc Brown into a beloved icon of the 1980s said at a Niagara Falls Comic Con that a theoretical “Back to the Future Part IV” should convey an important message.

“I think somehow it needs to kind of convey a message about something that’s important to everyone, universally, like climate change. Some way of incorporating whatever fever is going on at the moment into the film and keep the feeling of one, two and three,” Lloyd said. “That’s a tricky, tricky deal. Because you don’t want to do another one and disappoint. So I don’t know. I’d be happy to, for myself. But we’ll see.”

Indeed, that would be a “tricky deal.” In fact, all three “Back to the Future” films were entirely apolitical and were strongest when focusing on more universal themes like making the most of the time that’s been given to you or respecting the course of history or (much to the chagrin of modern feminists) being an actual man that stands up for yourself instead of an effeminate pushover.

In the same talk, Lloyd said that his co-star Michael J. Fox was “very easy” to work with and that his battle with Parkinson’s disease has not curtailed his personality one bit.

Well, in a way, maybe it would be fitting for another BTTF film to be based on pseudoscience, considering the whole time travel bit was a bit out there, but still, the strength of this series was its mass appeal. Put a political agenda in it and that disappears, along with the viewing audience.

Rather than destroying a complete and perfect film franchise, how about we just not make another one and call it a day?

Sound good to anyone else?